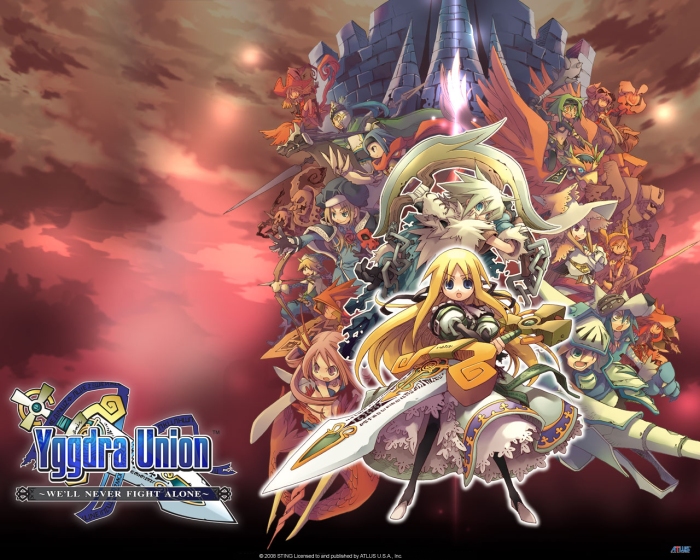 Yggdra Union: We’ll Never Fight Alone was originally released for the Game Boy Advance in 2006 as the second entry in Sting Entertainment’s Dept. Heaven series. It was remastered and re-released on the PSP two years later, with completely redrawn sprites and visuals, as well as some changes to gameplay and some of the cards used in battle. The PSP version was the one I played, using my Vita.

Yggdra Union opens with the pursuit of Princess Yggdra by soldiers of the Bronquian Empire, who had just seized her kingdom of Fantasinia. She was saved by the thief king Milanor, whose home was destroyed by the troops as they chased the princess. The two then teamed up to defeat the empire, amassing their own Royal Army to reclaim Fantasinia and crush Bronquia.

The plot didn’t particularly stand out, as there was little depth to it; interesting enough to make me keep going, but nothing special. I quite liked the game’s characters though, especially Milanor with his cheery disposition. Unlike the last game, the dub was enjoyable as well; they all felt well-suited to their respective characters, which was nice to hear. The game is visually appealing as well; I loved all the vibrant colours and the artwork, particularly the backgrounds and the character portraits.

Yggdra Union is a turn-based strategy game, with combat taking place on a gridded map. Before you begin the battle, you get to review your team members, decide who you want to take with you, restore morale where necessary and equip them. Equipment will only last for a few chapters each, and can also be used as a healing item instead of being equipped. There is no way to buy any of these items, which I found problematic; if you use too many of these items or had trouble finding them, you may well find yourself stuck.

Before you start a chapter, the game has you select a number of cards to take with you, which you accumulate as you play. Every card has three attributes: POW, MOV and ACE. POW and MOV are exactly what you think they are: POW indicates the strength or power of the card, and MOV indicates the amount of movement the card grants, which is shared between the party. Higher POW means stronger attacks that turn, while higher MOV allows your party to take more steps. A card’s POW increases every time you use it, so getting a lot of fights out of the one card will see it become faer more powerful. ACE is denoted with either a weapon type or ‘All’; if it says ‘All,’ anyone can activate the skill associated with the card. If it has a particular weapon symbol, then the character making the initial attack must have a weapon matching that symbol in order for the skill to be used by the rest of the party.

You select a card at the beginning of each turn, and will use that card throughout your turn and your opponent’s, and then pick a new one for the new turn. If you run out of cards, it’s game over, and you have to restart the chapter. I found this irritating, as it seemed to me to defeat the purpose of having a turn-based strategy game that forces you to rush through each chapter before you run out of cards. This thankfully wasn’t much of an issue in most maps as they were quite small, but there were some where I felt stretched. This also makes it difficult to collect more items. They cannot be purchased, so the only way to get more – aside from the few that bosses will drop – is to have characters stand on villages or shining spaces in order to pick more up. However, this takes up your already limited range of movement.

If you’re finding your team and your cards aren’t quite cutting it and you’d like to level up before the next chapter, you’re out of luck. There’s no way to go back and grind, so if you keep getting trounced by this one particular group of enemies and changing tack isn’t working, your only option is to restart the whole game. The game has a large number of save files at your disposal so you could save at multiple points along the way and avoid going back to the very beginning, but it’s an infuriating thing to have to do. Thankfully, I didn’t need to do this, but I can see it happening to others. Anything that forces you to restart the entire game is, to me, a major issue with the game.

All of these issues could have easily been fixed if the game had a free battle map or something similar, which you could visit freely to level up your characters and cards and get more items. This may be what annoyed me the most about these issues; there was such an easy way to fix it, but they just didn’t do it.

Each unit is comprised of a platoon which is commanded by the character shown on the map. These platoons are comprised of either four or eight troops, for mounted and ground units respectively. After a Union is formed and battle begins, both sides will attack with an initial strike, so you and your opponent can knock out some troops. Knocking out the platoon’s leader in this way will create a panic and almost guarantee your win; losing your own leader will prevent you from giving orders to your troops for that clash, so you can only watch as they flail their weapons and (probably) die.

Defeat in a clash does not automatically lead to the loss of a unit. Rather, they will only disappear if they lose all of their morale. Morale is lost every time they taste defeat, and if one of your characters reaches zero morale, that unit will pass out and exit the battle. You’ll be able to use them in the next map, but their EXP for that level will have been drained; it doesn’t let their actual level drop, but it can be a devastating blow if they were close to levelling up. They lose more or less morale depending on their performance; a close battle will result in a small loss, a thrashing will lose you a fair bit, and having your leader knocked out will knock out a lot.

You can influence the battle by ensuring you exploit weapon strengths and weaknesses. Sword beats axe, axe beats lance and lance beats sword in a triangle that will be familiar to Fire Emblem players. In addition to this, rods, favoured by mages, are strong against all three of those physical weapons, and bows more easily defeat rods. Within battle itself, you can choose to be either passive or aggressive at the press of a button, and change it at any time during the clash. Choosing to be passive fills a meter, which when it reaches 100%, allows you to use the skills attached to your current card. Passiveness comes at the cost of lowered attack. Choosing to be aggressive consumes this meter, though you’ll do more damage while it’s active. It’s a nice way to add another element of control to battle, requiring you to think carefully about the placing of your units and which style of play you’ll use within the clashes themselves.

Yggdra Union: We’ll Never Fight Alone is a game I would only recommend to hardcore RPG fans and even then, would probably tell them to spend their time and money elsewhere. The game looks good and the battle system is interesting, but the act of playing through levels can be infuriating with the paradoxical rushing of a tactical turn-based RPG and the lack of grinding ability. If you really need to play this game, wait for an inevitable Atlus sale to surface on the PSN, as it does every few months.

Images lifted from the LP Archive run for this game.