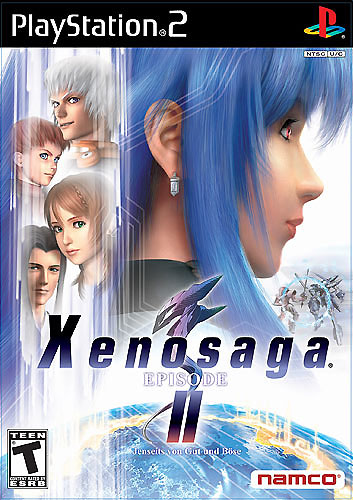 The second game in the Xenosaga trilogy, this game acts as a bridge between the first and the third.

Xenosaga Episode II released in the West in 2005, two years after the first game. Unlike the previous entry in the series, this one released in the PAL region. It picked up exactly where Episode I left off, and in Europe was shipped with a disc that summarised the story from the first game to bring us up to speed.

Episode II delves more deeply into the stories of Jr., MOMO and the URTVs. URTVs are organic, humanoid weapons created to control a mysterious substance known as U-DO. Jr. is a URTV himself, and one of their leaders. Episode II goes over the origins of all the URTVs, shows us more about the crucial events that occurred on Old Miltia in the past, and what happened to the characters that played major roles at that time.

Not a lot happens in the plot in Episode II; it is far more bland than the first game, as so much of it is an elaboration of past events. I found myself surprised when it ended, as it felt like the story was building up to an amazing finale that just didn’t happen. I personally found it interesting learning about the in-game universe’s history and that of its characters, but those craving the action of the first title will be left wanting.

The art in Xenosaga II changed dramatically from the last game, as did a couple of the voice actors, which was immediately apparent and startled me. I eventually got used to it, but it will likely throw off anyone coming into this game after playing the last. The music in Episode II was nice to listen to, but Yasunori Mitsuda’s failure to reprise his role as composer for the series was apparent, as this game did not contain many memorable tracks.

This game, like the last one, uses the circle button to select and X to cancel. I was used to it because I played this one immediately after Episode I, but it’s something to bear in mind. It also lets you carry data over from the first game, earning you bonus experience and some silly costumes for your characters.

Battles in Xenosaga Episode II are turn-based. Each attack hits a different zone of your opponent, denoted as A, B, or C. Every foe you face will have a certain sequence of zones that they’re weak to; hit the correct order, and you’ll be able to break them. From there, you can knock them over and decrease their defences, dealing even more damage. Ether skills consume EP and are accessed via a separate menu. These can be learned as you level up, which I’ll get into a bit later.

You can do a couple of attacks each turn, and you can see before you choose your attacks whether your move will be physical- or ether-based, which is handy. Stock is this game’s equivalent of defending, and every time you use it, you save up one stock; you can keep up to three. The more you have, the more attacks you can do in a single turn. Some characters can perform double attacks together as well, provided they are currently in battle and possess the required stock. It’s a nice way of giving the player more options in battle.

Some areas of Xenosaga Episode II allow for mech-based combat via E.S., or Ein Sof units. Battle in these plays out pretty similarly to regular combat. Stock is replaced for EC, which can be consumed for more powerful attacks. E.S. units have their own set of equipment, as well as their own set of items for healing and for buffs. Items for E.S. units cannot be used for ground units, and vice versa.

You can have more of your allies attacking in a row by boosting them. Boost is accumulated every time you attack, and can be consumed at any time to ensure they will move to the front of the queue, which is displayed in the bottom-right corner. Bear in mind that your opponents are able to boost as well. Like the last game, Xenosaga Episode II contains a roulette that gives the attacker – either you or your opponent – an added effect to their moves each turn. One increases your critical hit rate, one nets you extra boost, one gives you more skill points and the final one does nothing. They always appear in the same order, and when coupled with the turn order figure, allow for effective planning to gain some nice bonuses each turn.

Skills in Episode II are divided into levels and classes. There are four levels which each contain several classes, and each class contains four skills. Classes are unlocked with class points, and skills learned with skill points. You start on level one, and unlock the higher levels as you master classes; classes are mastered when you learn all four skills within them. Mastering classes also nets you more class points, which in turn allows you to unlock more classes and then gain access to more skills.

Some skills are locked at the beginning of the game, and you need to track down their corresponding cards in order to be able to access them. In the skill list, if you click on their class, these skills will show up as “????” until their card is found. Everyone has access to the same skill set, so you can build all of your characters as you please.

Skills cards and other rare items can be found throughout the game, with a number locked behind segment addresses. Segment addresses are large red doors unlocked by various keys, which you’ll find around the map. A section of the menu tracks which doors and which keys you’ve found, as well as whether or not you’ve picked up the treasure inside. These are pretty useful features, as you can tell at a glance which keys and which addresses you need to find and loot.

Sidequests are another way to earn rare items. These can be tracked via the Global Samaritan Campaign, or GSC. They’ll keep a description of the quest and the next action you need to take, and you can tell just by looking at it which quests have been completed, are in progress, or haven’t been taken yet. It’s a handy tool for keeping up to date with all of the game’s sidequests, and I was grateful for its existence in the 48 hours I spent playing this game.

If you missed any quests, segment addresses or keys, you needn’t fret, as Xenosaga II brought back Unus Modulus Network (UMN) diving. This allows you to head back to any previously visited areas from selected save points. This can be done at any time with no limits on where or for how long, so if you ever need to hop back for any reason, there is absolutely no reason not to. 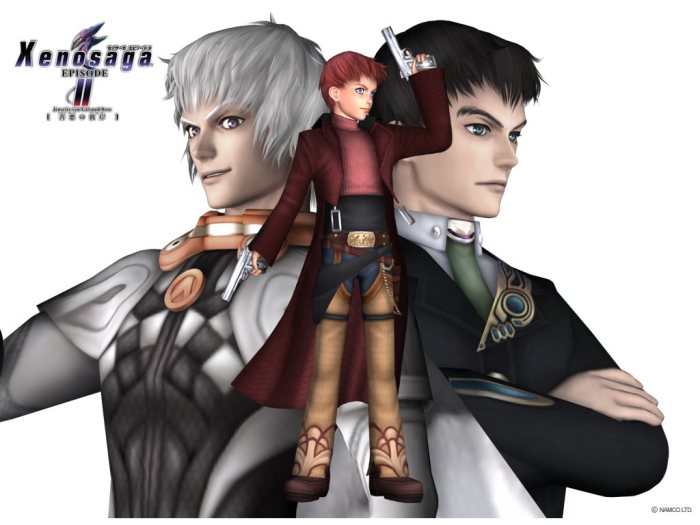 Xenosaga Episode II is a fun game with a good soundtrack and solid turn-based combat. It has a fair amount of depth in its skill system, and the tracking for its sidequests is excellent. While the story contains less action than the previous game and may be viewed by some as dull, it deals a lot in politics, characters and the universe’s history. In all, it was definitely an enjoyable experience that I would be more than happy to play again.

Screenshots were sourced from Games of All Generations in HQ\HD Jr‘s YouTube channel.