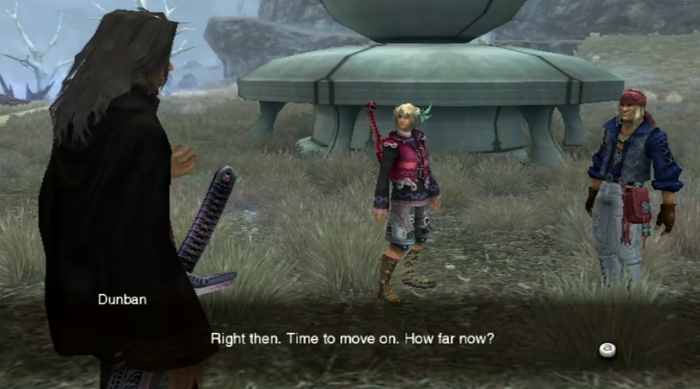 This chapter, the party gets deeper into the marsh and discovers a bunch of High Entian ruins!

Shulk lay awake beneath the glow of the High Entian lamp, thinking of Dickson and the Monado. Why can’t I sleep? Shulk turned over and closed his eyes, listening to the steady breathing of his comrades. But in his mind’s eye, he could see nothing else.

Shulk sat up with a sigh.

“Dunban!” Shulk watched as the man eased on to the ground beside him. “Yeah, little bit.”

Shulk pulled the Monado from his back, holding it out before he and Dunban. “It’s just…” Shulk wasn’t sure where to begin, so he fell silent. After a short while, he started again. “I just… I want to understand how the Monado works. I want to know where it came from, why my parents had it, why I can wield it when even you can’t, Dunban.”

“Hmm.” Dunban leaned back on his hands, staring up at the starry sky. “Why not? What do I have that you don’t?”

“Uh…” Shulk was taken aback by the question. “Um… Loads of things.”

“Well… Military training, for one. You’re far stronger than I am.”

“You are far more capable than many of my trained comrades from the military, Shulk, and brute strength won’t get me very far. Try again.”

Dunban suppressed a laugh. “Not as old and wise as Dickson. And he dare not wield the Monado,” Dunban teased. Shulk blushed, and Dunban grinned. Then his tone turned more serious. “I’m not sure what exactly it is, Shulk, but you definitely possess something myself and others do not that allows you to harness the power of the Monado in a way none of us can.” Dunban paused. “You possess… a strong drive, or will, to learn as much about the blade as possible. I feel that has something to do with it.”

“Well…” Shulk admitted, “that’s true, I guess. I was talking to Dickson earlier, and… I feel  kind of like the Monado was my parents’ final gift to me. I want to unravel its secrets and figure out how it works. Maybe then I can understand why they left it to me.”

“Would you ever wield the Monado again, Dunban?”

“No.” Shulk was startled by Dunban’s quick and firm response. “I can still barely use my right arm. I had to learn to fight all over again with my left after the Battle of Sword Valley. Aside from that…” Dunban hesitated.

Shulk recalled what Dunban had told him after he had arrived home from the war. “Are you afraid?”

Dunban served Shulk a wry smile, and looked away. “Yes.”

Shulk looked up at the sky.

“I completely lost myself, that final night,” Dunban said softly. “I was no longer in control of my own body. I was merely a vessel for the Monado’s will. I had felt it tugging at me before, but… It overpowered me that night. That blade nearly killed me. If I ever have to wield it again, I will, but… I hope it never comes to that.”

Woah. Shulk was taken aback. I never thought Dunban was afraid of anything…

Shulk shook his head. “I did when I first picked it up, but… I haven’t felt anything like that since we drove the Mechon out of Colony 9.”

“Interesting.” Dunban got to his feet. “It’s been good talking with you, Shulk. Try to get some rest.”

“All right.” Shulk watched Dunban go, and then lay down to rest.

Shulk was the last to awaken the next morning. He hurried to gather his things together, scoffed down some food and scampered over to the rest of the group, who watched him with amusement.

“Right then.” Everyone turned to face Dunban as he spoke. “Time to move on. How far now?” 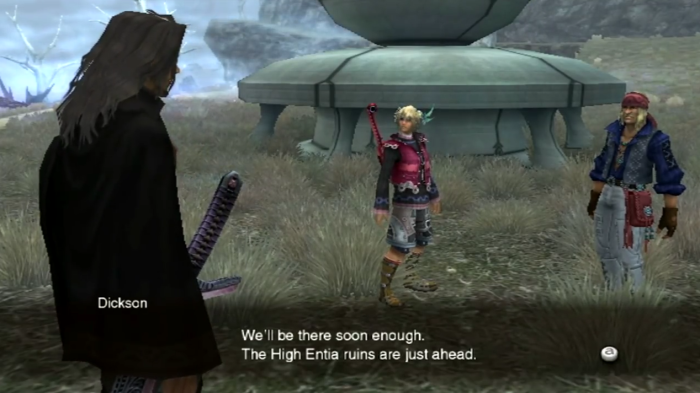 “We’ll be there soon enough,” Dickson replied. “The High Entia ruins are just ahead.” The party looked to where Dickson was pointing. “Are we all ready to head off?” When everyone confirmed, he started to lead the way. “Let’s go, then.”

“Weren’t there still some monsters for us to clear out for them Nopon?” Reyn asked Dunban.

“That is correct,” Dunban replied. “We still need to defeat three coppice quagwings. I suspect they’ll be ahead. The Nopon told me that they’re found on route to Makna Forest, so I suspect they’ll reveal themselves sooner or later.”

Dickson led the party off the path and into a body of water. Reyn wrinkled his nose. “Do we have to go through this stuff?”

“There’s no other way,” growled Dickson. “I’d prefer to not get wet myself, but we don’t have a choice in the matter.”

Reyn sighed and trudged along, the water getting no deeper than his knees.

They followed the path as it rounded a corner. A floodgate lay ahead of them, with short cliffs on either side of them. Shulk noticed what appeared to be sculptures atop them. “Have there been homs out here before?”

Dickson followed his gaze. “No. They’re all High Entian. They used to use this area for all kinds of rituals. There’s even the remains of a rite of passage up ahead, past that floodgate. The Mauk Floodgate, it’s called.”

Dickson shrugged. “The name of the old bugger who had them built, I imagine. Those higher ups are quite fond of naming things after themselves.”

Shulk gazed up at the structures on the cliffs as they passed under them. There were a couple of bridges, flanked on either side by ancient statues. They even saw what appeared to have once been a gazebo, though the roof was missing, its columns sitting jagged in the sky.

“I wonder what took that off,” Shulk head Sharla mutter.

“And what it was used for,” Shulk added.

As the party approached Mauk Floodgate, they saw three shadowy figures sitting on its walls. They took to the air when they spotted the group.

“Oi, Dunban!” Reyn called. “Reckon they might be them quadwings we need to take out?”

“I do believe so, Reyn.” Dunban drew his katana, Reyn doing the same. “Dickson! Sharla! Otharon! Do you think you can shoot any of them down before they reach us?”

“I can try.” Sharla readied her rifle, Otharon mimicking her.

Dickson shrugged. “Mine’s too short ranged for that. But,” he pulled it out all the same, “if they get close, I’ll take care of it.”

Shulk pulled out the Monado, watching the birds as they began to dive towards them, squawking loudly.

With a crack of Sharla’s rifle, one of the birds fell from the air and began thrashing in the water. Otharon took down another, which dropped to the ground, lifeless. As the third one reached the party, Dunban raised his blade, cutting it out of the air. Reyn walked over to Sharla’s quadwing and ran it through, silencing it.

“That was amazing!” exclaimed Kacha.

“They didn’t seem to be all that tough,” Dickson commented.

“No,” Dunban confirmed. “Though they would be difficult to deal with to any unarmed Nopon.” He sheathed his sword. “That should help those merchants get home safely, now.”

The party continued onwards. Curved stone pillars anchored the metal barriers that comprised the main wall of the floodgate. One of the metal components was missing, leaving space for the group to get to the other side.

Ahead, a stone ramp rose from the water, bringing them on to a long path leading to another set of High Entian ruins. 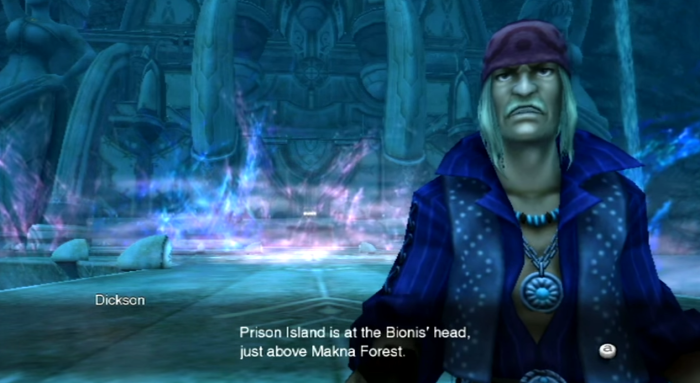 “The upper regions are through that entrance,” Dickson informed them. “You gotta go through Makna Forest first.” He turned away from the ruins. “Prison Island is at the Bionis’ head, just above Makna Forest.”

“It pains me to say it,” Otharon began, “but this is the point where I turn back. I must see to the survivors, and I’m also very concerned about Colony 9.” 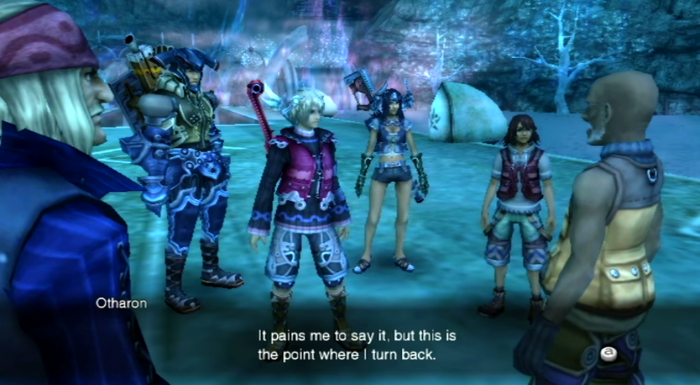 “I understand.” Shulk nodded. “Thank you for everything.”

Say it now, or you’ll regret it. “I might have said a few things I shouldn’t have back in the mine,” Otharon admitted. “Forgive me.” Otharon’s tone turned more serious. “I owe you my life, young man. I’ll never forget it, Heir to the Monado.” He looked to Sharla. “Medic, will you stay with them?”

“I…” Sharla paused for a fraction of a second before continuing. “I want to help Shulk. The Mechon must pay for what they did.” She stared at the ground, fighting to stop her voice from shaking. “And I’m sure Gadolt is still alive somewhere. If he is, I have to find him.” 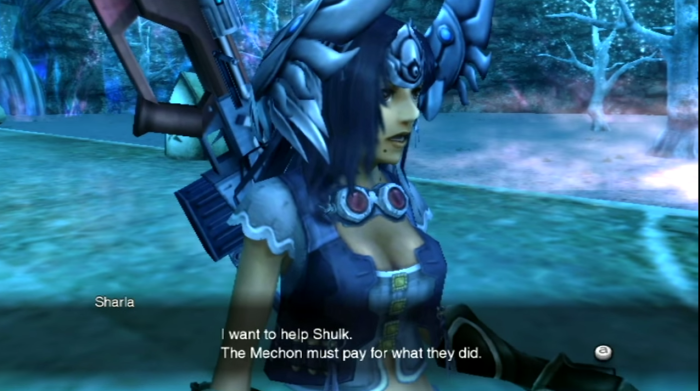 “Find him, for me too,” Gadolt replied firmly. “Good luck.”

“Sharla,” Juju began, “I want to go with Otharon.”

“Are you sure?” Sharla asked him, surprised.

“Yeah.” Juju nodded. “I’ve never seen anything cooler than Shulk smashing Mechon with the Monado! But… I’m just slowing you down.”

“No way, kid!” Reyn interjected. “You just need to shape up, like me!”

“It’s okay,” said Juju quickly, “I’ve made up my mind. Compared to you guys, I know I’m pretty useless. But that’s cool. Because I know what I can do. I’m gonna go back to the colony, and help the survivors rebuild their lives.” 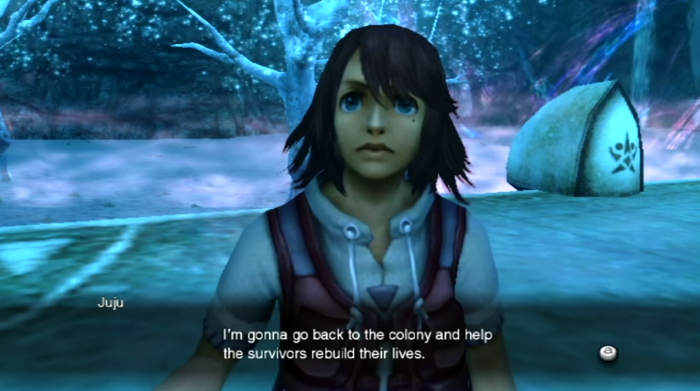 Juju was relieved. “Thanks!”

“Dickon,” Shulk approached the man, “are you leaving too?”

“The Mechon may be gone from Colony 6 now, but that doesn’t mean we’ve seen the last of ‘em,” Dickson told Shulk. “When they launch another attack, and they will, Colony 9’s gonna need my help.” 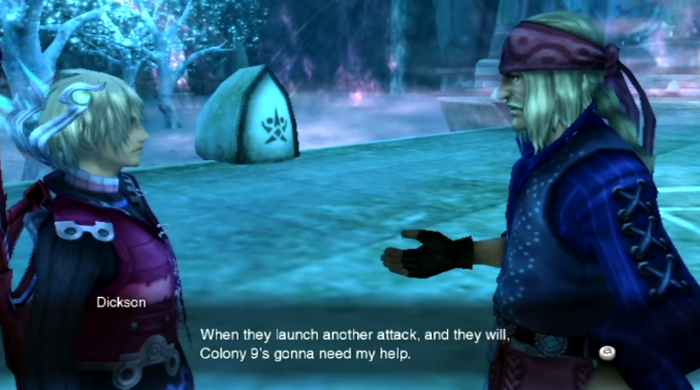 “This ain’t the last you’ll see of me,” Dickson assured the group. He looked back at Shulk. “You should be all right for now. Look after the Monado.”

“You can bet on it!” exclaimed Shulk. “We won’t let the colony down.”

“You’ll make us proud, Shulk.” He began to take his leave, pausing as he passed Reyn. He looked the man up and down before speaking. “You, on the other hand, need to buck up your ideas! How else are you gonna protect Shulk?”

Reyn chuckled. “Thanks for the heads-up, Dickson.”

“Good luck,” grinned Dickson. “See ya.” He, Otharon and Juju began to head back through the marsh to Colony 6. He paused at the top of the ramp, looking back at Shulk, Reyn, Sharla and Dunban. He sighed and muttered under his breath, “Can’t say I feel too good about deceiving these kids.” 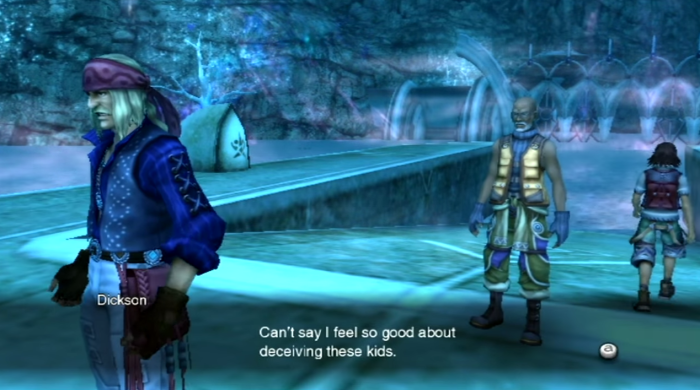 Otharon glanced back to see Dickson had stopped. “What’s that you say?” he called.

“Just mumbling,” said Dickson, waving a hand around. “Forget I said anything.” He turned and followed Otharon and Juju back to the colony.