This post is devoted to all the news we have on Monster Hunter Stories. So hit the link and read on!

I’m a huge fan of the series, having gone so far as to do a weekly article series on the new monsters a while ago with my Japanese copy of 4G. I stream it every Monday night at 8 PM (Australian Eastern time) with my partner and another friend as well. I’ll be looking to pick up the article series again at the end of the year when I have more time, and revisit 3 Ultimate and Freedom Unite monsters.

The game has a release window of 2016 in Japan, and has yet to be announced for a Western localisation. I feel confident we’ll get it though, as Monster Hunter 4 Ultimate was the best selling game (in the West) to date. The popularity is growing here.

Earliest updates will be at the bottom, with the most recent at the top. Each update will have categories listed after each date, so you can find what you’re after easily. If not, you can also leave a comment asking for information and I’ll be happy to help.

All released trailers and official channels will be embedded at the end of the article. Enjoy!

Capcom have released a new trailer for the game, which you can check out below. We see a bit more gameplay, including battles and some monsters in use.

Someone has uploaded 15 minutes of Monster Hunter Stories gameplay. Check it out:

The Tokyo Game Show kicked off today, and there was a hell of a lot of stuff revealed for Monster Hunter! Stories got two trailers, and another super cool announcement.

The announcement was an anime series! It’ll air on Fuji TV next year. We don’t know much about it, but stay tuned!

And then there are the trailers. The first is a story trailer, and it shows off various places around the world of Monster Hunter Stories. Check it out:

The second showed off a bunch of gameplay, and got me super excited for the game (more so than I already was, anyway):

Something to note is that the Diablos had not appeared in any media before the gameplay trailer, so that monster is another confirmed one.

After a whole lot of nothing, Famitsu today updated with a ton of information about Monster Hunter Stories! The website has updated Gematsu has been kind enough to translate it all, so I’ll largely be basing this entry off that article.

Monster Hunter Stories begins with our main character and their felyne companion, Nabiru, qualifying to become monster Riders. The elder of their village gives them the Kizuna Stone as congratulations. This occurs at a time when the people are noticing their land is changing for the worse, which they believe is related to the Kizuna Stone. The Hunters and Riders of the land (including our young hero) must stand up to ferret out and stop whatever is causing this threat.

Riders can bond with friendly monsters known as Otomon and use them in battle, which I’ll get to later. You can find Otomon eggs lying around the place as you explore, with the monster inside the egg dependent on where you found it. 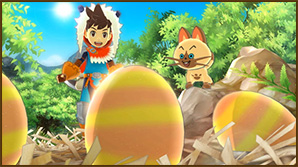 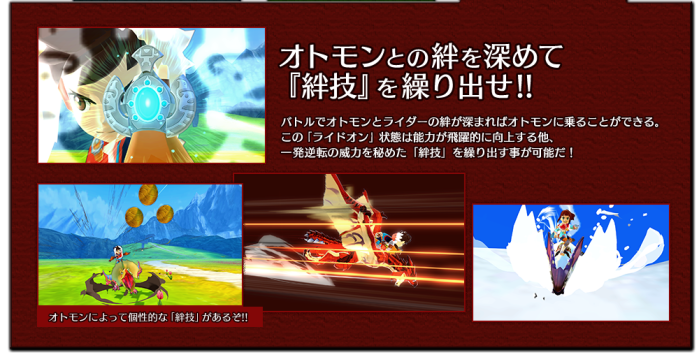 We have had two locations revealed for the game thus far. It’s been confirmed that there will be more, and there will be some never before seen across the Monster Hunter series. 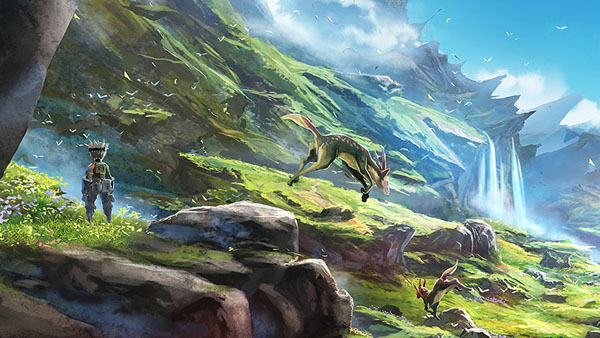 A few of the main characters have been revealed. We have our main character, whose gender can be either male or female. They’re described as a sharp, energetic youngster, full of curiosity.

Nabiru is a felyne that travels alongside the protagonist.

The Senpai Rider offers helpful advice to the main character. He is very kind, and quite hot-blooded.

Below is one of your childhood friends, who is just as curious and energetic as the main character. She’ll often encourage them to keep going.

Another of your childhood friends is known to be kind and quite mature for his age. He also dreams of becoming a Rider.

The Elder of the Dragon Tribe is the village’s mayor. He keeps a watchful eye on everyone in the village, and is known for his mischievous nature and love of puns.

Felynes and melynxes in Stories are known to have some kind of special connection with humans, and can understand their speech.

Battles in Monster Hunter Stories are turn-based, and will feature a rock-paper-scissors system to give on monster an edge in battle. These three options are known as Power, Speed, and Technique. Both Riders and Otomon fight in battle, though it is the Otomon that will be dealing most of the damage. Riders will have different special abilities depending on the weapon they have equipped.

Otomon have a mind of their own, and will generally fight their own way. Once certain criteria are met, they will team up with their Rider for a combination attack. Riders can even jump on to the back of their Otomon once the two share a strong enough bond, making the both of them much tougher. The Kizuna Stone the protagonist gets from their village elder can be used to perform powerful techniques together with their Otomon.

The monsters I’ve spotted so far are:

Did I miss any? Let me know if you’ve spotted something I haven’t!

I’m waiting for either Gematsu to upload a bunch of screenshots, or Kogath to get back to me with some. Once I get them, I’ll update the article!

There was a Monster Hunter livestream tonight. It mostly focused on Monster Hunter Cross, the new Felyne Village game and Spirits, but we did find out that Monster Hunter Stories will be present at Tokyo Game Show, which will be happening in mid-September this year.

There will be a playable build at the show, and we’ve also been told we’ll get some tons of information on the plot and more aspects of the game. Hopefully we get some more information between then and now; if they’ll have a playable build, I imagine we might get a gameplay trailer or something. I hope so, anyway.

I’d also like to add that Matt, who I stream with weekly at New Game Plus, will be at TGS and will be playing the shit out of Stories and Cross. I’ll be sure to post his impressions.

Capcom have stated in a meeting that they expect Monster Hunter Stories will have sold 2.5 million copies by March 31st next year.

This implies that the game will be out before then, and if they want to sell that much, it would have to be well before then.

I’m also wondering whether they’re expecting that many sales in Japan alone. It is a lot, but then again, it is Monster Hunter in Japan, which always sells like crazy over there. And this does look like something that could be played by kids, expanding the audience base even further than the rabid fans who bought nearly 2 million copies of Monster Hunter 4 in its first week over there.

Either way, importers – get ready for early next year.

This was the day Monster Hunter Stories was announced. It’s a 3DS RPG game, featuring an art style that is noticeably different from the main series of games. For now, check out the trailer:

You’ll take on the role of a rider rather than a hunter, and something of note is that the main character is seen riding the Rathalos in the trailer. It’ll be interesting to hear this elaborated upon.

In addition, the rider and their palico companion were seen running off with an egg, while being chased by an angry Tigrex. It’s got me wondering if they had stolen that Tigrex egg so they could hatch and raise it, to become an ally like that Rathalos was?

Monster Hunter series director spoke briefly with Famitsu about the game; I’m going to pull this quote directly from Gematsu:

We want to imbue this game with a storyline and brand of fun that can only be done within the confines of an RPG, while still preserving the core sensibilities that people have come to associate with Monster Hunter

So it’ll be an actual, full-fledged RPG, story and all. Siliconera tells us it’ll be telling the tale of the relationship between riders and monsters. As a lover of RPGs, I can’t wait to hear more about this game!

A bunch of screenshots have also been released. Check them out below: