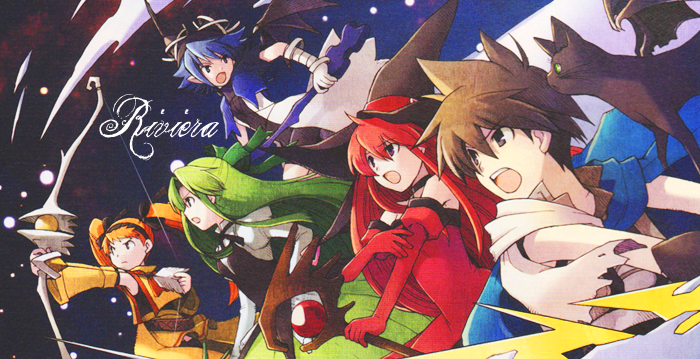 Riviera: The Promised Land was the first in Sting’s Dept. Heaven series and was published by Atlus.

Riviera: The Promised Land was first released outside of Japan on the GameBoy Colour, and made its PAL region debut on the PlayStation Portable. The version I played for this review was the one I downloaded from the PSN, and played on my Vita.

A millenium before the events of Riviera, there was a great war known as Ragnarok. The demons of Utgard overwhelmed the gods of Asgard, who then sacrficed themselves to create the Grim Angels. The Grim Angels, armed with mighty weapons called Diviners, defeated the demons and Utgard was renamed to Riviera. The Grim Angels were left to serve under seven Magi imbued with the knowledge of the now-deceased gods, and Riviera was repopulated with peaceful Sprites, who contained the gods’ power.

A thousand years after the war, rumours abound that the demons are about to return. Our protagonist, Grim Angel Ein, travels with his felyne familiar named Rose and another Grim Angel named Ledah to prevent the demons’ return. It’s a pretty interesting story, based on Norse mythology.

The story is divided into chapters, and you start each one in the village of Elendia, which acts as your home in the land of Riviera. There are a few places to visit here, so you can talk to people and find items. The Hobbit Smithy powers up some of the weapons you can find in dungeons, and gets mad if you make Tolkein jokes. There’s also the Elder’s home, which often needs to be visited in order to advance the story. A few more places exist in Elendia, which you can explore to gain some more backstory and find some items.

I found the characters to be pretty dull, and the English voice acting was… not that great. I am one to listen to the English voices whenever I have the option, but even I found myself swapping to Japanese audio. The main characters themselves were irritatingly naive at times, but not enough to make the game less enjoyable. I was also mildly annoyed by the way the rest of the party seemed to fall over themselves to try and impress Ein. However, in the context of his relationship with each of them having the ability to change the ending and even cause him to pair up with one of them, it makes more sense. 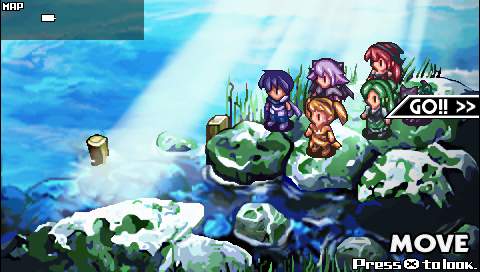 Riviera has you traverse dungeons to progress the story, which play out in a very structured and linear manner. The game will point you towards the next dungeon and tell you to conquer it, and I did not find any way to return to previously explored ones. Each dungeon is broken up into smaller sections, which in turn are divided into areas. There are special events in each area, some of which occur as part of the story, and some optional ones which can be initiated by consuming TP.

You can move freely between areas, but not between different dungeon sections. At the end of a dungeon, the game will rate your overall performance, based on your items, the number of turns you took and a couple of other criteria. The score you get in a dungeon determines how much TP you start with at the beginning of the next one. 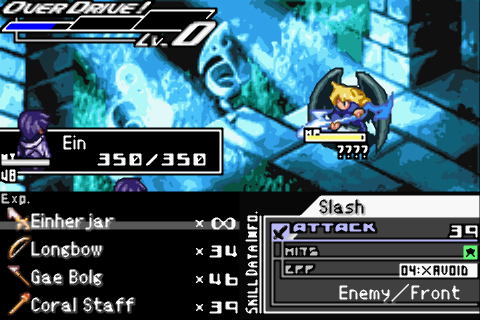 Battles are turn-based, and do not reward you with experience or gold; there are no vendors in this game that ask for coin. At the beginning of a battle, you are given access to your foe’s stats and abilities, and then select three party members and four items (including equipment) based on that information.

In battle, you have the option to attack, use an item or defend. At the top of the battle menu is an Overdrive bar, which fills as attacks are landed by both you and your opponent. When it fills, characters are able to use it to execute a powerful attack; the higher a character’s skill level with a particular item, the more damage they will do, at the cost of more of the bar. Using a Diviner’s attack will shatter the bar completely, rendering it unusable until the next fight. 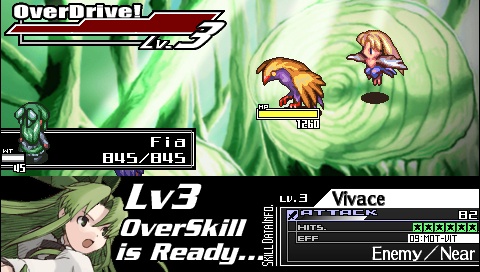 You cannot change any items or party members at any point mid-battle, even if someone dies or an item is entirely consumed. In addition, all items and equipment have limited uses, save for Ein’s Diviner. Items and TP are earned at the end of each battle.

I mentioned above that no experience is received at the end of battle. Each character has their own weapon class specialisations, and can master every weapon of that class that you happen upon. With each weapon they master, their stats will increase.

I found this system interesting, as it was different, and I enjoyed it. However, as I mentioned above, I could find no way to return to previous dungeons. You also have a limited inventory, and need to throw things out frequently. As such, there doesn’t appear to be any good way to fix a case of underlevelledness; you can’t go back and grind, and to level up effectively, you’ll need to use each new weapon as soon as you get it so the characters that can use it can level up before you’re forced to toss it out.

The game makes up for this by giving you an option for practice battles, which can be initiated at any time and which will not cause item durability to drop. If, however, you come up against an opponent you cannot defeat, there doesn’t seem to be much you can do about it. The game will drop the boss’ health each time you lose, but it feels far less satisfying than coming back more powerful and beating it at full strength. And if you still can’t beat the boss after its lost some of its health… There really isn’t anything you can do, save for starting the whole game over from the beginning. 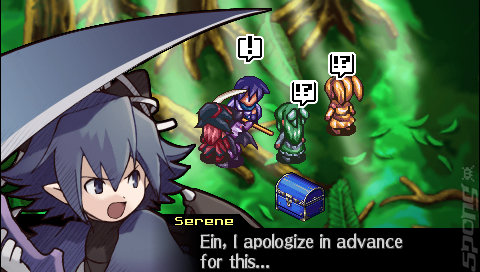 For all of its flaws, Riviera looked elegant and everything was very colourful. The soundtrack was nothing special; it comprised largely of background music, and didn’t particularly stand out to me at any point in the 22 hours I spent on this game.

Riviera: The Promised Land was a game filled with minor annoyances which did not have too large an impact on an overall enjoyable game. I had fun with the gameplay and loved the vibrant art utilised by Sting to bring the world to life. However, it certainly had its flaws, and some serious forethought is required so the player is not required to start over. It’s a game I’d recommend to those looking for something a little different from the norm, that still retains its fun factor.