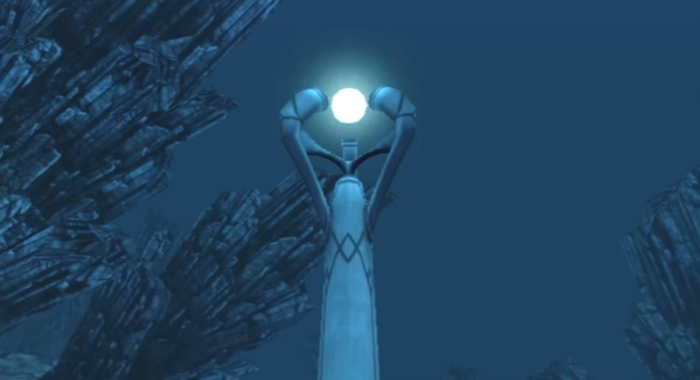 Chapter thirty-three of my Xenoblade novelisation. The party heads off towards Makna Forest with a few more quests to complete along the way, now accompanied by the nopon, Kacha.

Reyn woke to find a small shoulder digging into his ribs.

“Everyone’s going to leave without you!” exclaimed Juju. “Hurry up, slowcoach! We’re all ready to go!”

“All right, all right!” Reyn scrambled to his feet. He snatched up his bag and glanced around; his stomach growled.

Reyn looked up and quickly stretched out his arms, fumbling with the bundle the kid had tossed him.

“Don’t say I never do you any favours!” Juju teased.

Reyn tore open the bundle and ripped into its contents. He put it into his bag before he and Juju hurried after the rest of the party. As it turns out, they had only just left the camp, and were waiting for he and Juju to catch up.

“Well you’re up now, so let’s get moving.” said Dunban. He turned and began to lead everyone south-east.

“So where are we going?” Juju asked.

“We’ll be going past the fortress again, but we won’t be stopping there this time,” Dunban answered. “We also need to keep an eye out for the rogue beasts the Nopon merchants asked us to defeat. Officer volffs, mist rhoguls and coppice quadwings; don’t forget.”

“Even I up before you, Reyn!” piped up Kacha.

Reyn was startled. “What are you doing here?”

“Kacha return to Makna. There another Nopon at home who studying giants.”

“Kacha wanted to head back and report to his colleague, Lupa,” Dunban explained. “So we’ll be escorting him home. His intimate knowledge of the forest should prove useful to us.”

“And since Reyn late,” the Nopon thrust his orange orb into Reyn’s arms, “Reyn get to carry Daring of Giants!”

Reyn sighed, resigned to his fate.

“Let’s get moving, shall we?” Sharla suggested.

Dunban led the group back across the marsh. As they passed Zaldania Waterfall, they spotted a couple of mist rhoguls sitting on a tree branch. The birds watched them as they got closer, bristling their dark brown feathers as a sign of warning.

“I think these might be the flappers we’re looking for,” growled Dickson. Reyn slowly passed the Daring of the Giants to Kacha, keeping his sights locked firmly on the birds.

Sharla slowly raised her rifle to aim it at the rhoguls. They stared each other down; the party’s hands hovered over their weapons.

Sharla fired, and one bird dropped like a rock to the ground. The other screeched and dived towards Juju.

Reyn leapt in front of the boy, so the bird crashed into his shield with enough force to lift him off his feet, and a loud snap rent the air. Juju leapt aside as Reyn slammed into the ground on his back; the bird thrashed about on his shield for a few seconds before laying still.

Reyn thrust the mist rhogul aside and inspected his shield; it had not a crack in it. “My shield’s fine. What the hell was that noise?”

Dunban looked down at the rhogul Reyn had brushed off. “It seems as if one of the merchant’s requests has been fulfilled. Two more to go.”

“Juju, are you okay?” Sharla asked, hurrying over to check him for injuries.

The party continued on their way through the marsh. They put the waterfall behind them as they trekked through the Poison Swamp, where brogs were abundant in the toxic waters. Ahead of them was the Barren Moor; Dunban drew his katana.

“The rogue officer volff was last seen around here,” Dunban informed the party. “Be on the lookout, and stay on your guard.”

There was little to be seen at the Barren Moor, which was to be expected from its name. Water pooled between two gently sloping hills, with trees growing out of the mire. The party selected the longer of two routes in circomventing the moor, giving themselves more of a chance to bump into the stray volff.

Ren wrinkled his nose, the Daring of the Giants tucked under his arm. “It stinks.”

“Almost as badly as you do after a fight, Reyn,” Sharla quipped.

“I do beg to differ, Reyn,” smiled Dunban.

“Right,” agreed Shulk. “You’re not the best to judge your on stench, Reyn.”

“Of course I am! Who’s gonna know me better than me?”

A howl alerted the group to the presence of a new foe. The sound of feet running through the muck was soon followed by the appearance of a volff with light grey fur that darkened towards its tail and paws. A pale pink tuft of fur stuck up on the top of its head, like a small woollen cap. The creature’s eyes were on the party, its hackles raised.

The volff lunged at Otharon, who swore and leapt to the side. Dickson drew his weapon and fired a shot, hitting the beast in its front shoulder and blasting it backwards. He fired another shot into the beast’s head, and it lay still.

“Otharon!” Sharla hurried over to him. “Are you hurt?”

“Just a scratch,” he muttered. He showed Sharla his upper left arm, now sporting light scratch marks from the volff attack. Dickson and Dunban confirmed the beast was dead while she patched him up.

Otharon rolled his shoulder to get a feel for his arm. “Good job. Thanks, Medic.”

Sharla put her medical kit away. “No problem, Otharon.”

“Shall we get moving?” Dunban suggested. They continued around the Barren Moor, keeping an eye out for the three rogue coppice quadwings. They began to head east as the moorland curved, and then continued walking in that direction. They passed the Silent Obelisk once more, and then the Exile Fortress. Kacha shuddered as they put it behind them, the sun now close to the horizon.

A bright glow lay ahead of the party. As they approached, they saw it sitting on top of a tall white pillar, topped with three prongs which curved inwards to hold a small ball of light.

“This lamp… It has a very strange glow,” Shulk commented. 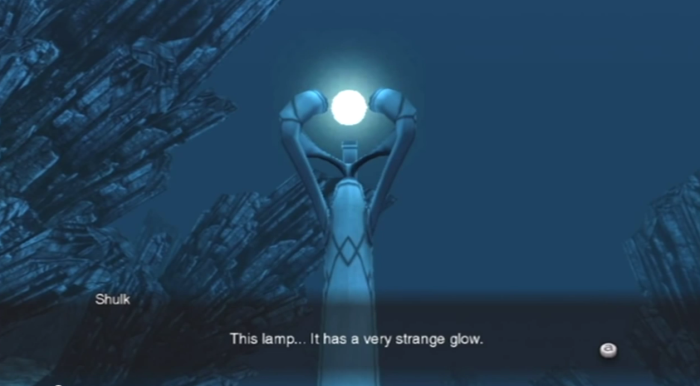 “It’s a remnant of the High Entia,” Dickson told him. “They’ve hidden themselves away in the upper reaches now, but at one time they controlled this whole area.” 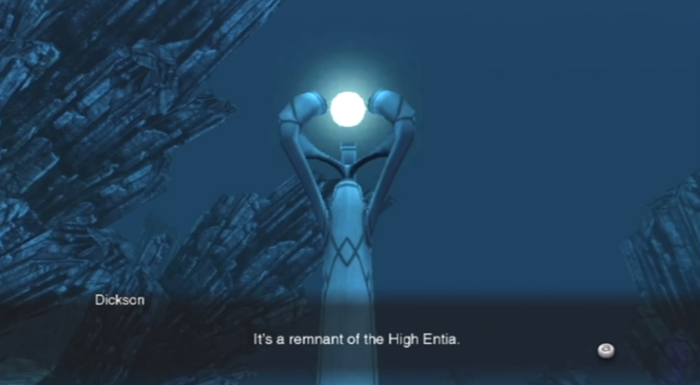 “Good for them,” said Reyn.

Dickson turned to the group. “It’s the perfect place to get some shut eye. The lamp’ll keep the monsters away. We’ll be safe if we rest here.”

The party set up camp and set about making dinner. Shulk leaned against the lamp behind him, his thoughts on Colony 9.

Fiora sighed in his mind, tilting her head back as they sat together at Outlook Park. “The breeze feels so good,” she commented. “It’s so peaceful,” she continued. “You know, Shulk,” she tilted her head to one side, a content smile playing on her face, “I hope every day can be like this, always.” 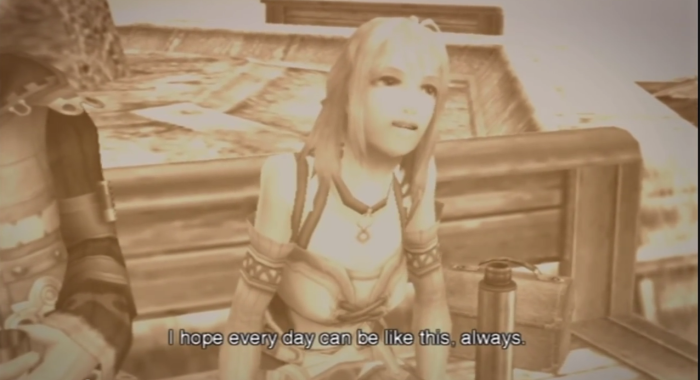 He saw the mobile artillery being smashed into the side of a house in the residential district before tumbling to the ground; Fiora was slumped forwards in the driver’s seat. And then Metal Face had pulled back his arm and thrust it into the cockpit; Fiora’s scream ripped Shulk in two.

He remembered the machine tossing her aside like a ragdoll, the nearby Mechon jumping on to the artillery and surrounding the cockpit…

Shulk stared at the dark ground, fighting back the hot tears welling in his eyes.

He saw himself, Monado drawn, watching a silver-faced Mechon flip over his head atop Prison Island. “You will pay for what you’ve done!” he roared.

The Monado’s blade grew to twice its standard length, and Shulk brought it down on Metal Face’s arm. The faced Mechon collapsed to the ground, and Shulk walked slowly towards him. “You will know the pain and suffering you caused the Emperor and Fiora!” 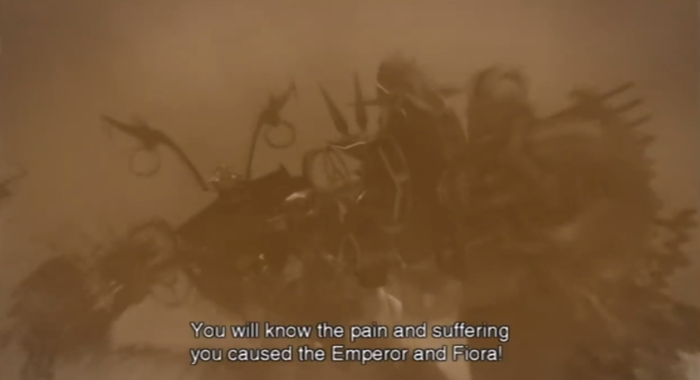 He saw himself cutting open the silver-faced Mechon to see its insides, before the images changed to the dream he had had in Tephra Cave; a man stood in shadowy mist, asking Shulk but a single question. 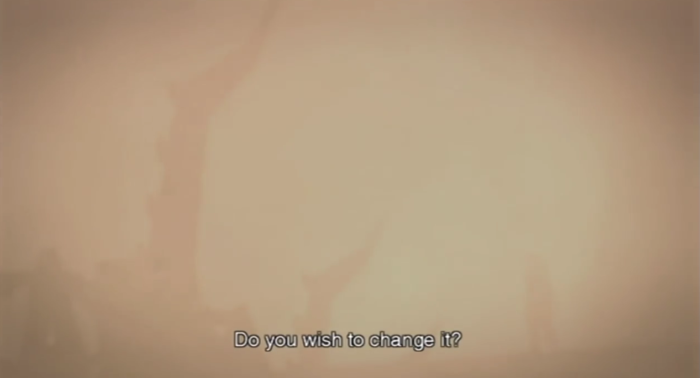 “Do you wish to change it?”

It’s not the future I want to change…

“Has it been that long?”

“Dickson.” Shulk was startled when his friend wandered over and leaned on the obelisk behind them.

“Fourteen years since I found you on that mountain,” Dickson said. “Seems like yesterday.” He thought back to the icy chapel on Valak Mountain, remembering the lifeless bodies strewn across the floor. At the end of a long corridor was a circular room, in which sat the Monado, surrounded by an aura coloured bluish purple. A small boy had been curled at the pedestal’s base, breathing steadily. 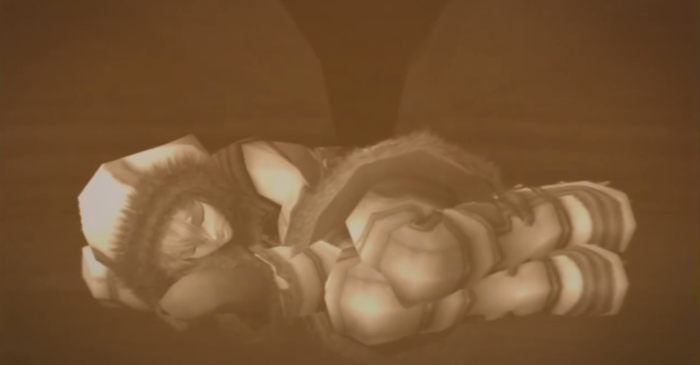 Shulk finally stood up. “I owe it all to you. If you hadn’t found me that day, I wouldn’t be here now, discovering the world.”

“Forgive me, Shulk,” said Dickson. “Sorry I couldn’t save your folks.”

“Now I think about it, that was when I found the Monado as well,” Dickson mused. “This might be crazy talk, but maybe you and the Monado are part of some higher plan.” 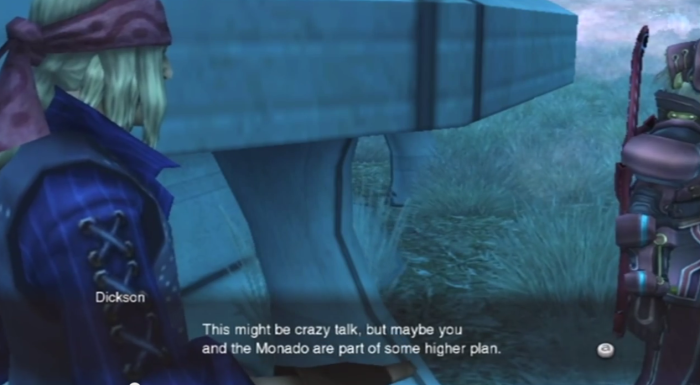 “I don’t remember much at all,” Shulk admitted. “But I know that my mum and dad left me it. The Monado was their final gift to me. At least, that’s how I used to think of it. That’s why I wanna discover its true power, and help defeat the Mechon. But so far I’ve just been creating piles of Mechon scrap,” he laughed.

“So you don’t just wanna study it in a lab after all,” Dickson observed.

“This sword…” Shulk began, and then tried to start again. “There must be some way…” Shulk lapsed into silence, and Dickson quietly left Shulk to his own thoughts. 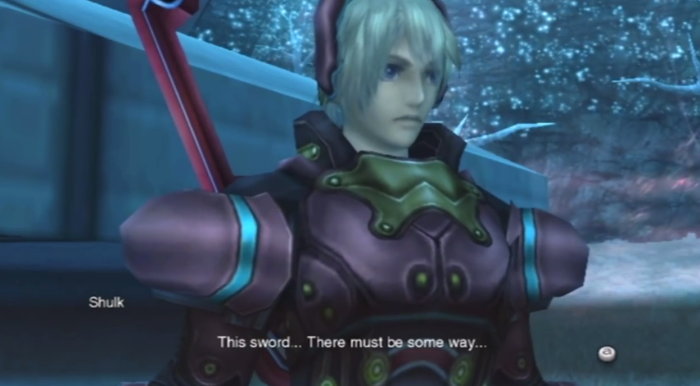 One thought on “Xenoblade Novelisation: Gem Which Cannot Be Stolen”