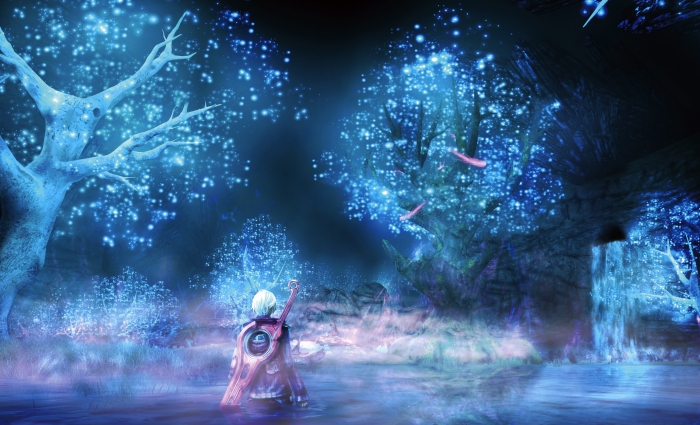 The thirty-first chapter of my Xenoblade novelisation sees the party head over to the Exile Fortress to rescue a nopon in trouble.

The party rose as the sun brightened the sky, eating breakfast as they packed their things for the day’s hike. Dunban glanced over their camp area to ensure there was nothing left behind. He turned to his friends. “Are we all ready to go?” When they all confirmed, he nodded approvingly. “Then let’s keep going. The Exile Fortress is to the east.” He started to lead the way across Satorl Marsh.

“What were the monsters we needed to fight along the way, again?” Reyn asked.

Dunban reached into his pocket and pulled out the list of monsters the Nopon merchant had given them. “Two detox brogs, three coppice quadwings, two mist rhoguls and an officer volff.”

“They’re all monsters that hang around during the day,” Dickson observed. “We should see a few walking around here. So keep an eye out.”

“Speaking of which…” Reyn stopped and pointed into the murky water on the other side of the Crown Tree. Inside were a pair of detox brogs, leering at the party and slowly creeping towards them.

“Do you think those could be the ones we’re after?” murmured Shulk.

“Possibly…” Dunban drew his sword and approached the edge of the swamp.

The brogs sped up, their eyes on Dunban as they lunged towards him.

Sharla, Dickson and Otharon immediately pulled out their rifles and fired, stopping one of the beasts dead in its tracks. The other pounced on Dunban, who easily sidestepped the beast and sliced it along the length of its side. The creature gasped, before a shudder wracked its body and it collapsed to the ground. Dunban pulled a pencil out of his pocket and crossed the brogs from the list.

Dunban tucked the list and pencil back into his pocket. “Shall we resume?” He and the others struck south-east, heading for the Exile Fortress to rescue Kacha.

They headed around the Barren Moor, a large pool of water with a number of small islands laying inside it. Brogs lounged on the islands, while quadwings sat on the branches of trees growing out of the water, watching the party as they walked past.

“Shouldn’t we be fighting those?” Reyn asked, returning the quadwings’ gaze.

“The Nopon said there were only a few, which had attacked them first,” Dunban pointed out. “As long as they’re not initiating the fight, we should be fine.”

“They might not be attacking us because we’re not so small,” Sharla pointed out. “We might not look as tasty as the Nopon.”

“Well, why you gotta be so small, pipsqueak?”

“What’s that?” Shulk pointed to a tall, spear-like object stuck out of the ground ahead of them.

“That’s the Silent Obelisk,” Dickson answered. “The High Entia built it when they frequented the Marsh. Helped them get around. It used to be all lit up at night, but its power source has run dry.”

The Silent Obelisk, they saw as they approached, had a semi-circular base set into the ground and what appeared to be a giant, pale, three-pronged staff extending out of the ground.

“I haven’t been this far out into the swamp,” Otharon admitted. “I never went any further into the marsh than I needed to. Most of our business was close to the entrance; we had no purpose in coming out this far.” “

Otharon folded his arms and scowled. “Hmph. I’m just saying this is unfamiliar territory. We’re relying on you and Dunban, Dickson.”

Dunban fixed his sights on the fortress that was beginning to come into view. “Not sure that’s a good idea, old man.”

“There it is,” said Dunban, pointing ahead of them. “The Exile Fortress.”

The fortress was carved out of the grey stone that rose out of the ground. The party could see it had a couple of different levels, with grass growing all over the structure.

Otharon frowned. “What’s that on the side of the fortress?”

Sharla squinted. “It… looks kind of like a door.”

“Hey,” said Reyn, pointing at a tree beside the fortress. “What’s that?”

“What do you see, Reyn?” asked Shulk.

“Dunno…” Reyn dashed forwards and snatched something up from the ground. When he came back, they saw he was clutching a key. “Reckon this key fits into that door?”

“Only one way to find out,” said Sharla. “Any idea how we get up there?”

“There’s a path that goes all the way round the fortress,” said Dickson. “Starts on the other side. We should probably head over there first.”

Dickson led the way east until they hit a cliff face. They followed it south as it slowly curved west towards the fortress, before they ended up next to the building.

“Where to now?” Reyn asked. The fortress stood before them, towering over the party.

“We go around,” Dickson informed them. “This path here,” he indicated a path to their north, “will take us around the building to the other side.” He led the party along it, around a corner and then another, until they were outside the door they had spotted before.

Reyn pulled out the key he had found earlier and inserted it into the lock. It slotted in perfectly.

“Be careful, Reyn,” Sharla warned. “We don’t know what’s behind that door.”

Reyn carefully pushed the door open. On the other side of it was what appeared to be a throne room, filled with humanoid creatures covered in blue-green scales. There were nine in total; three had their backs to the party, with three opposite those. To the left was a throne in which sat what was clearly their leader, flanked by two more of the creatures. Behind the throne, Reyn was startled to see, was a Nopon. It was shaking, its ears over its head. It appeared to be terrified. Reyn withdrew, gently closing the door behind him.

“There are a bunch of lizard people in there,” Reyn informed the group.

“Ignas,” growled Dickson. “There are a bunch of ‘em around the marsh.”

“I saw a Nopon hiding behind a throne,” Reyn replied. “That might be him. There are nine of the ignas in there. Six are right in front of the door. There’s a throne to the left, which has one sitting in it and two on either side of it.”

“So the Nopon’s off to the left?” Dunban sought to clarify the layout.

“Then it might be best if we tried to sneak in,” Dunban mused. “Reyn, do you think we could get to the throne unnoticed?”

Reyn scratched his head. “If there was only a couple of us, maybe. Yeah.”

“Well then,” Dunban turned to the group. “I’ll go in with Dickson and Reyn. Sharla, keep watch. If they see us and attack, we’ll need you to let Shulk and Otharon know so you can all help us out.”

“Got it,” Sharla confirmed.

“What about me?” asked Juju.

“It’s too dangerous for you, son,” Otharon told him.

Juju opened his mouth to protest, but Reyn cut across him. “Oi, kid. Remember what happened the last time you tried to help out?”

Juju’s mind flashed back to the Ether Mines. He closed his mouth and nodded mutely.

“All right.” Dunban moved towards the doorway. He placed a hand on the door, beckoning for Reyn and Dickson to join him. “The Nopon was to the left. Correct?”

“All right. Keep your hands on your weapons, stick to the walls, and above all, stay silent.”

“Reyn?” Dunban looked at him.

“I know how to be quiet, Dunban!” Reyn exclaimed.

Dunban winced. “You are not being particularly convincing, Reyn. Make sure you watch where you place your feet.” Dunban turned back to the door and slowly opened it. He entered the room and crept to the left, staying as close to the wall as possible. Reyn followed him inside, with Dickson bringing up the rear.

Reyn glanced at the ignas as they snuck along the side of the room. They had large blue-grey plates running down the back of their heads, necks, arms and legs. The front of their bodies had smaller plates which were green in colour, with lizard-like scales covering their face. Their feet ended in three elongated, pointy toes, their hands in three fingers and an opposable thumb.

Six of them were holding wicked blades with spikes poking out from their edges, and a wooden shield rimmed with metal in the other hand. Two were clutching wooden clubs topped with yellow stones, while the one sitting in its throne had an axe in each hand.

Dunban reached the Nopon first, and knelt down in front of it. He placed a hand on the top of its head and then quickly moved the other to its mouth to muffle its shout of surprise. The Nopon’s eyes widened in shock as Dunban placed a finger to his lips and slowly reached inside of his pocket, showing him the monster list with his friend’s handwriting on it. The Nopon calmed down and slowly nodded. Dunban removed his hand from the Nopon’s mouth.

“Thank you very much!” he squeaked.

Oh for the love of… Reyn whipped out his gunlance as Dickson swore and drew his gun. The ignas with the axes leapt over the back of its throne, bringing its weapons down on the Nopon.

Dunban unsheathed his katana and brought it up to meet his opponent’s axes as they came crashing down. Dickson trained his gun on it and fired; the breast staggered backwards and Dunban slashed it to pieces.

The other ignas went berserk, all eight of them charging Reyn, Dunban and Dickson.

Shots were fired from behind the horde; two of the sword-wielding beasts fell, and they stopped, confused. Sharla and Otharon stood in the entryway, guns poised. Shulk stood in front of them, Monado in hand.

Dunban leapt forward, and Reyn was quick to follow. Dunban cut through another sword-wielding ignas and struck another, who blocked his ferocious attack. Dickson fired on one of the ones holding clubs; Reyn took advantage of the distraction to strike it down.

The remaining ignas tried to escape, but were confronted by the rifles of Colony 6. They were quickly wiped out by gunfire and the flash of a red sword.

Dunban grimly focused on the Nopon they had found behind the the throne. “Are you Kacha?”

“Why’d you have to shout like that?” yelled Reyn. “We were doing fine, we could have just snuck you out!”

“Me sorry! Me sorry!” squeaked the Nopon.

Dunban turned back to the Nopon. “My apologies for his outburst. So, did you go by the name of Kacha?”

“We were asked to rescue you by your friends,” Dunban replied.

“Oh! How nice. But me not done researching.”

“The secret of the giants!”

Shulk had an idea. “Do you know if this has anything to do with it?” He reached into his bag and brought out the mirror he had found on the Bionis’ Leg at Daksha Shrine.

“Ooooh! Let me see!” Kacha reached up with his arms, and Shulk handed him the mirror. “Yes, me think this is it!” The nopon jumped up and down excitedly. “But, how you find this?”

“Me think this unlock the treasure!”

Kacha nodded. “Ignas here to steal treasure. But they not find it! Kacha know how find it.”

“Where is this treasure?” Shulk asked eagerly.

“On roof of fortress!” exclaimed Kacha. “Kacha have key. We can go, if hom hom want.”

“What do you say?” Shulk asked his friends.

“I don’t see why not,” said Dunban. “We’ve come this far already.” The others agreed. Dickson’s eyes narrowed.

Kacha nodded and walked behind the throne. He presented a key with a flourish, and the wall behind the throne melted away. He faced the party again. “Hom hom want follow?” He led the way out the door and outside, up to the top of the fortress.