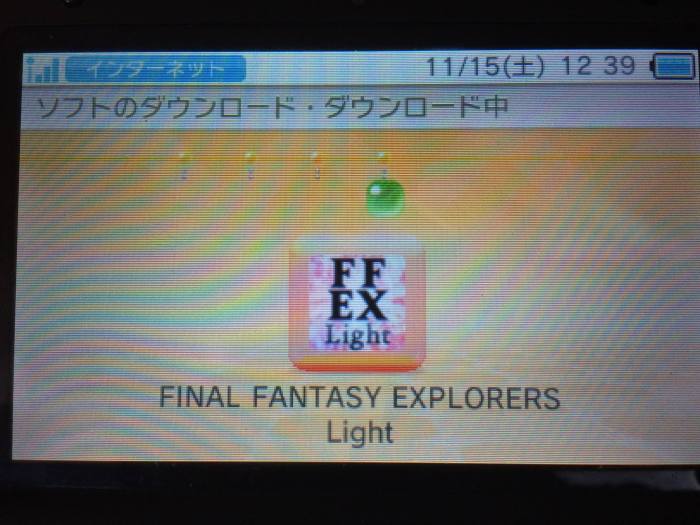 The demo for Final Fantasy Explorers is now out on the Japanese eShop. I spent a good few hours playing it with a couple of friends yesterday. The first thing I will say is that this game is NOT import friendly for those who do not know the language. We managed to fumble our way through a few quests by accidentally figuring out the requirements (GUYS I KILLED A FROG AND THE QUEST SCREEN NOW READS 1/5 KILL THE FROGS), but we eventually stopped because after half a dozen quests, we were collectively stumped on what to do next. As a result, I cannot see myself buying this game on my Japanese machine.

I can definitely see myself playing it for many, many hours should the game see a localisation, however. Final Fantasy Explorers is a quest-based game; you take quests from the broker, you run out on to the field, and you meet the quest requirements. The ones we did all involved defeating some kind of foe or collecting a drop. We started with a couple of small-time “Kill 5 of this monster”, had to collect 20 drops, and then had to go slay a dragon.

There were a couple more quests after that one, and then we could no longer figure out what to do next for a while; eventually someone stumbled on an answer. He discovered that the area you need to be in actually flashes on the map, so we just slew all the monsters in the area and found the rare item we needed to clear the quest. And then we started the next quest and got our asses kicked by Ifrit.

Another option we unlocked in the demo had something to do with subquests. It looks as if it’s a list filled with extra quest requirements, which you can do for extra rewards. Once you complete it, it’s removed from the list, and you can turn it in for extra goodies.

There are customisation options available at the beginning of Final Fantasy Explorers. There’s a whole gradient of skin colour, and separate ones for eye and hair colour. You can also change hairstyle, eye type and facial expression, as well as being able to name your character. In-game, the equipment you have on changes the appearance of your character.

There were six classes available in the demo, which could be swapped in the main menu. I know of the base class, the archer, monk, knight, black mage and white mage. Swapping classes affected stats, as well as the equipment and skills you could use.

Equipment is crafted using the parts dropped by the monsters you kill, reminding me of my beloved Monster Hunter. Your equipment can also be upgraded in the same vein. You pick a piece of equipment, and then pick an item to upgrade it with. Different items affect different stats, and you can see how much a certain item has been upgraded by looking at a meter below it. I’m guessing that when that meter fills up, that item will no longer be able to be upgraded.

Sometimes when you kill enemies, they drop a soul. Souls have a different appearance to regular drops, so you’ll know when you’ve found one. These souls can be taken to a vendor in town, who will then turn these souls back into their living counterparts for you to take with you on quests. Your new buddies can level up in combat, and can also be fed monster drops to level up faster. They can’t go with you when you’re questing with friends.

A lot of these functions require CP, which I’m guessing stands for Crystal Points. Acquiring new skills, upgrading equipment – all of these things and more require them. They are a separate entity to gold, which you use to initially purchase items that are later upgraded. You accumulate CP through battle and through completing quests.

The demo for Final Fantasy Explorers was really fun, and it’s definitely made me much more interested in the game. I wouldn’t recommend picking it up in Japanese unless you know the language well; I know I won’t be. Here’s hoping for a localisation announcement some time soon!

If you’re thirsting for more or want to hear a different perspective, check out the impressions written by my best friend for Game Podunk. He is also one of the people I was playing with. Thanks to another friend for translating a couple of things for me!