Chapter twenty-four of my Xenoblade novelisation. The party regroups, catches up, and plans their next move.

With the Mechon now gone, Dunban and Dickson strolled over to the rest of the party. A smile crept up Otharon’s face as they approached. “I thought it was you,” he said fondly. “Nice to see you, Dickson.

“It’s been a while, grandpa,” Dickson drawled. “One year if my memory hasn’t left me.” A smirk curled his lips. “Good to see you haven’t kicked the bucket.”

Otharon laughed. “Put a sock in it.”

“Wait…” said Sharla slowly. “Dickson? Dunban?” She looked between the two. “You’re the heroes who risked your lives a year ago, in the battle to defend the colonies.”

Dickson looked Sharla up and down. “What’s a pretty young lady like you doing hanging around with this bunch of slackers?” Sharla’s eyes narrowed, but she made no reply.

Shulk spoke. “Dunban, Dickson, thanks for helping us out back there.”

“I don’t believe we did anything,” said Dunban easily.

“He’s right,” Dickson agreed. “Save your thanks for that giant bird.”

“What was that thing?” Shulk queried.

“A Telethia,” Dickson answered. “A mystical beast that protects the sleeping Bionis. Though,” Dickson’s tone grew thoughtful, “I’ve never heard of one venturing down to where us Homs live. Strange.” 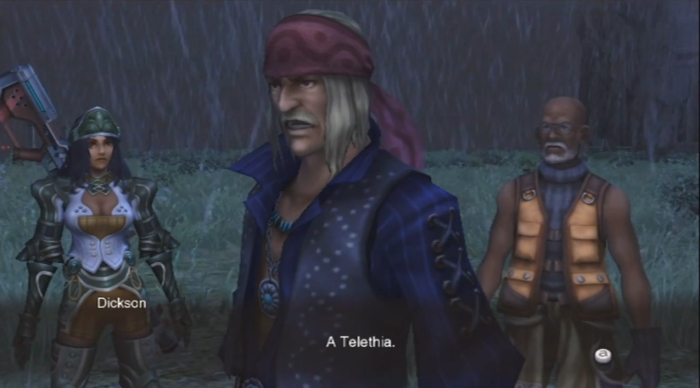 “A mystic beast that protects the Bionis,” Shulk echoed.

Dunban turned to Shulk. “So, what’s your plan from here? Follow that metal-faced machine, I presume?”

“What else?” challenged Reyn. “He’s gonna pay for what he did to Fiora.”

“Well then,” said Dunban. “There’s only one place he’d go. Galahad Fortress in Sword Valley,” he told them. “A year ago, those things were building a huge fortress, right in the valley. Tactically, it’s an excellent location to launch attacks from. I feel there’s a strong chance they’ve now finished building it. That would explain why both colonies were attacked recently.”

“Sword Valley…” Otharon’s thoughts were cast back to the war. “The very place where we made our last stand one year ago.”

“So it’s settled,” said Reyn. “Bash down a fortress and smash some metal brains!”

“There’s somewhere else I need to go first,” said Shulk.

Reyn was startled. “But what could be more important than…” he paused as he realised what must have happened. “Wait… You saw another one.”

When Shulk nodded, Dickson frowned. “Saw what?” he asked. “What’re you on about?” Shulk and Reyn looked at each other before telling Dickson and Dunban of the visions he had been seeing with the Monado. Otharon listened as well, intrigued.

Dickson considered what he had just been told. “These visions sound pretty handy,” he decided. “Well, out with it. What d’ya see?”

“I was somewhere very high up,” Shulk began. “I was fighting at the peak of a huge tower. Fighting Metal Face. I heard a voice, and then the Monado’s power was unleashed. His armour instantly gave way. The Monado doesn’t work on Metal Face at the moment, but if that vision comes true…” 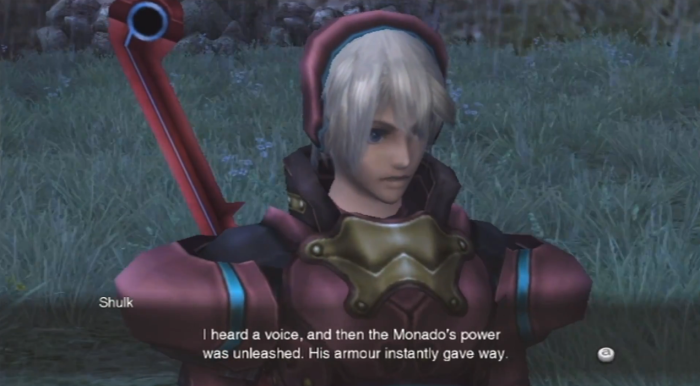 “Can you remember anything else from your vision?” Sharla asked.

Shulk thought for a moment before replying. “I remember a huge horn. That’s it!” he exclaimed. “As I fought Metal Face, I could see the Bionis’ head.”

Dickson closed his eyes. I knew it. “Prison Island.”

“I’ve never been,” Dickson began. “But I’ve heard of a black tower at the head of the Bionis. They say it was built by the ancient High Entia race.”

“The High Entia are real?!” Shulk started to get excited. “I thought they were a myth!”

“I wouldn’t blame you, son,” said Dickson. “An ancient race living at the top of the Bionis? It does sound crazy. But Bionis is home to all kinds of different people, not just us. That includes the High Entia.”

“The High Entia, huh?” said Dunban. “I’d dismissed them as folklore as well.”

“Have you ever met one?” Shulk asked breathlessly.

What can I say? I’m well travelled.” Dickson looked out over Splintered Path. “And it’s all for your future. Day and night I’ve searched for new lands, met new cultures and gained knowledge for our people. The life of a wandering old fool. A lonely one at that.”

Dunban chuckled. “Stop your whining. You do it ‘cos you enjoy it. And you make a tidy profit.”

Dickson rounded on his friend. “Who asked you, Dunban?”

Dunban smiled and turned to Shulk. “Well then, Shulk, what’s it to be?”

But will you waver? “There are alternatives,” Dunban pointed out. “We could abandon the colonies, find a place the Mechon will not discover and live in secret.”

“I realised something while we were fighting Xord,” Shulk told him. “Wherever we go, they’ll follow. We can’t run from these things. We must fight on.”

Dunban felt proud. Good lad. “I see. Then I am obliged to join you.” 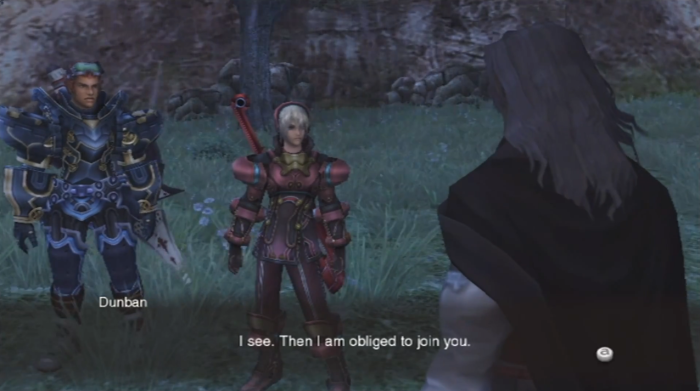 “You want to come with us?” Shulk was shocked.

“No way!” exclaimed Shulk. “We know you’re stronger than anything! Right, Reyn?”

“I’ve recovered a great deal since we last met,” Dunban informed the boys. “And that miserly old coot over there made me this.” He gestured at the katana resting on his hip. “Sharp, light. Perfect for cutting through steel. Show me a Mechon and I’ll slice it in two. I might not be in peak condition, but I’m useful.” 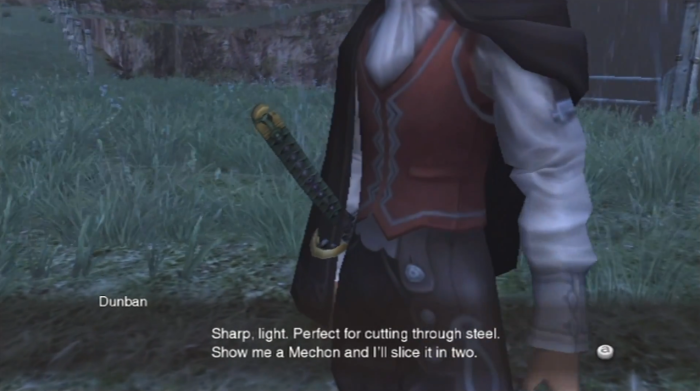 Dunban nodded. “We’re in it together now.”

“You can count on us, Dunban.”

Dickson scowled. “Miserly old coot? That sword is forged from Mechon armour. It’s worth every penny.”

“So you keep saying…” Dunban muttered.

“If you wanna go to the Bionis’ head, you’ll need a guide to get to the upper regions,” Dickson told the group.

“We’re at the bottom,” Dunban observed, “so I guess the only way to go is up.”

“Right,” Dickson agreed. “But we’ll need to go up the lower back first.”

“The lower back…” Shulk muttered.

“Colony 6 is right at the top of the Bionis’ Leg,” said Dickson. “So we’ll have to head around the waist.” He turned towards the south. “Through a place called Satorl Marsh. Follow me.” He started to lead the way. 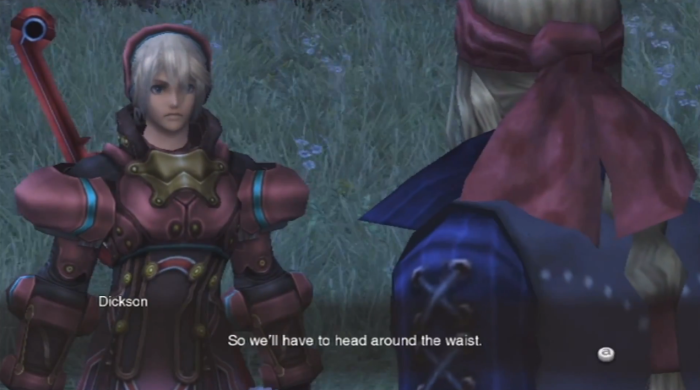 Dickson glanced back, irritated. “What?”

“You may have just got here, but we’ve been down in the mines for the entire day. And Otharon’s been stuck inside the Ether Mines for a month,” Sharla pointed out. “We all need some rest.” She turned to the boys. “Right guys?”

“I guess so,” Shulk shrugged.

Otharon nodded. “I would like to see all my friends again.”

Dunban turned to his friend. “We’ve travelled pretty far as well. Some rest could do us some good. A few days won’t hurt us.”

Dickson scratched his chin. “All right then. Been a while since I’ve seen the folk at Colony 6.” He turned to Otharon. “Where are you all hiding now?”

“You’ll have to ask Medic,” Otharon replied, indicating Sharla. “She was the one who evacuated the civilians when the Mechon came.”

Dickson turned to Sharla. “So, where are all of the residents of Colony 6?”

Sharla tensed. Dunban seems all right, but this one makes my skin crawl. “We’ve been hiding out on the Bionis’ Leg, south of Kamos Guidepost,” she said stiffly. “I can take everyone there now, and we can have a hot meal.”

Sharla nodded and turned to the north, leading everyone back towards the refugee camp.