Here in chapter nineteen of my Xenoblade novelisation, we enter the Ether Mines in pursuit of the new faced Mechon!

Sharla led Shulk and Reyn north, towards an elevator that would take them down to the level of the Drainage Outlet that made for the entrance to the Ether Mines. Exiting the elevator, they found themselves facing the Mechonis, its sword looming large over them.

The boys found themselves overcome with a slight bout of vertigo as they stared at the thin rocky paths, surrounded on either side by nothing but a drop into the endless sea. The paths made Reyn think of very thin fingers, reaching out to touch the cliff face. They criss-crossed one another, some higher up to the top of the cliff than others.

Sharla began to walk along the path. Shulk and Reyn looked at each other. “Relax, just stick to the middle and you’ll be fine.” The two reluctantly followed her.

Reyn kept his eyes on the back of Sharla’s head. Don’t look down. “What’s this place called?” he asked, trying to keep himself distracted.

“Splintered Path,” Sharla replied. “You can probably guess why.”

The path dipped down slightly as they walked before levelling out. The path split off to their left, but Sharla led them onwards. It split again, and this time Sharla followed it left as it went uphill. She then took another right, and the boys found they could see their destination up ahead.

“Is this the Drainage Outlet?” Shulk asked as they approached a huge bronze pipe that tunnelled into the rock.

Sharla nodded. “We should be able to sneak into Colony 6 through here.”

“Well then, shall we get going then?” Reyn prompted. Sharla glanced at him, and then led the way into the mines. Lizard-like creatures with lanterns hanging from their heads scurried across the floor of the drainage tunnel—Upas, Sharla called them. She led the boys up a flight of stairs and into the Drainage Control Room. It was small and filled with metal containers holding equipment used for mining ether.

Sharla was surprised to find a couple of Nopon merchants alive inside. The Mechon can’t have made it this far, then.

Talking to the Nopon confirmed this idea. They said they had been living in Colony 9 for a while, but when they tried to return to their village, they had found Colony 6 overrun by Mechon and been unable to proceed. They had then descended into the mines to hide from the machines.

It’s even affecting the Nopon. Sharla thanked the merchants for their time and headed with Shulk and Reyn into the next part of the mine. They began to walk across a metal floor suspended on the rock when Sharla stopped abruptly at the top of a flight of stairs leading down to the ground. She quickly knelt down. “Guys! Kill the noise.”

Shulk and Reyn followed Sharla’s gaze and were startled to see an M63 unit on patrol. “A Mechon.” The machine moved out of sight. 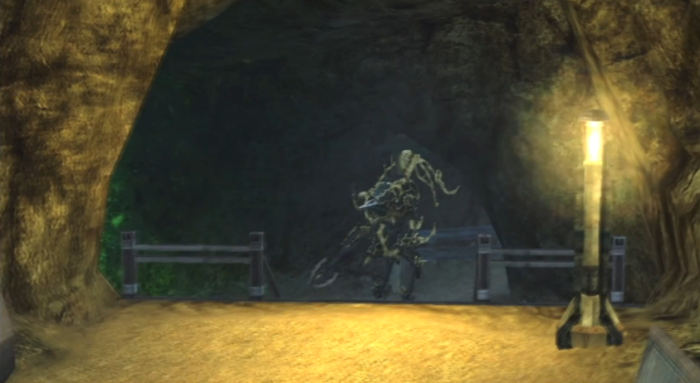 “I can’t believe they’ve taken the mine too!” muttered Sharla. “That means the Defence Force and residents are…” She slowly got to her feet. “Oh no, Juju!”

“You said yourself, they can’t have seized the entire area, right?” he continued. “I bet you they’re holed up someplace safe. Juju is alive,” Reyn’s tone took on a determined edge, “and we’re gonna find him.”

Sharla looked between the boys, overwhelmed by their support and willingness to so help a stranger. “Yes, it’ll be fine. Reyn… Shulk… Thank you.”

Sharla looked thoughtfully at the corridor through which the Mechon had disappeared. “We need to go deeper into the mine. I’ll lead the way, since I’m the only one of us who knows these tunnels.” She looked back at the boys. “That sound all right to you?”

Sharla nodded and began leading Shulk and Reyn through the twists and turns of the mine’s tunnels. Follow the green moss… They had barely rounded the first bend when they froze. Up ahead at a three-way junction lurked a Mechon. It was one of the spindle-legged M42 scout units, on patrol.

“What do we do?” Reyn whispered.

“Wait to see what it does,” Sharla replied quietly. “We need to go right here, so if it goes left…” The trio watched from afar as the machine paused at the junction before slowly making its way off to the left. Sharla breathed a sigh of relief. “Come on. Let’s go before it comes back.” She hurried towards the junction and turned right, Shulk and Reyn in tow.

Two more Mechon floated ahead. They looked like M31 units, but they seemed slightly different to Shulk; he couldn’t quite put his finger on it.

Sharla glanced at the opening in the wall to the left of the Mechon, which glowed green. That’s where we need to go. She pulled out her rifle. “We’re going to have to take these two out. We need to head through that tunnel off to the left.”

Reyn looked at the cave ahead of them; it stretched on for a short distance and then twisted out of sight. “Maybe they’ll go the other way?” he suggested.

Sharla shook her head. “It’s a dead-end. They don’t have any need to go down there if they’ve been sitting on that location.”

Shulk drew the Monado, Reyn his gunlance. Shulk cast Enchant, and the trio quickly dispatched the Mechon. Sharla then led the boys south, through another area of moss-covered walls.

The three Homs halted, startled by the sound of fire up ahead. “An ether rifle?” Maybe it’s… “Gadolt!” Sharla immediately took off towards the sound, leaving her companions behind. 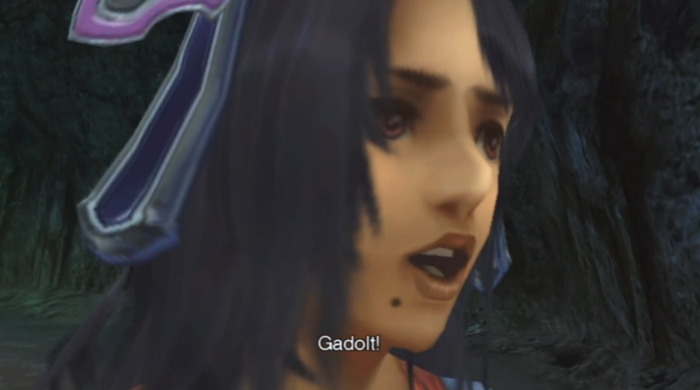 “Sharla, wait!” called Reyn. He and Shulk hurried after her and stumbled into a small room which had been fitted out with a metallic Homs-built platform. It was connected to their level by a short flight of stairs. The place was swarming with M31 and M42 Mechon; Sharla was firing her rifle when they entered. “Gadolt!” Sharla cried. She took aim and loosed another bullet at an M42.

A brown-skinned man with a white beard was crouching behind a container in the Ether Mine’s storage depot. “I know that voice,” he muttered. He looked out from behind his shelter. “Medic, is that you?!” He quickly ducked back behind his refuge as a Mechon fired at him.

“Otharon!” Sharla hurried down the stairs towards him, shooting at a scout unit on the way.

“That’s our cue, Reyn!” Shulk was quick to follow Sharla on to the platform, his best friend hot on his heels.

“Oh yeah!” Reyn followed Shulk as his friend slid in front of Sharla and Otharon, weapon raised. Reyn joined him, standing between the Colony 6 residents and the Mechon. “There’s only four of ’em,” he observed, grinning. “Piece of cake!” He looked to his friend. “Shulk?”

“Right.” Shulk swung the Monado, casting Enchant on his allies as he assessed the situation. They were up against two Mechon M31 units, an M42 Scout Unit and an M69.

His friend’s words proved true. With even numbers and the power of the Monado, the Mechon were quickly dispatched. Where’s Gadolt? wondered Sharla.

Otharon inspected the Mechons’ broken bodies before addressing Sharla. “Medic. Why are you here?” He sounded surprised to see her.

Otharon slowly walked away from Sharla. How do I tell her… “We have much to discuss.” He turned to face her. “You’d better come with me.”

“Sir.” Sharla and the boys followed Otharon into the old mining base. The rocky corridor had caved in in the time Sharla had been away and was now accessed via a new tunnel through the wall. Once there, Sharla told Otharon all that had happened in his absence.

Otharon considered all he had been told. “So, Juju has been taken by the bronze-faced one.”

“Sir,” said Sharla, “what about Gadolt?”

I can’t put this off. Otharon turned to face Sharla, grim. “Gadolt is gone.”

“Gone?!” Sharla echoed, not quite believing it. “What do you mean gone?”

Otharon cast his memories back and began to recount the tale. “Gadolt and I planned a surprise attack to set everyone free. But we failed…” the old man’s voice turned bitter, “miserably. When I woke, Gadolt was nowhere to be seen.” He looked to the weapon leaning on a machine behind him. “Only his rifle remained.” Otharon stared at the ground. “But he is alive. I can feel it. We may not be joined by blood, but he’s like a son to me. I’d know if he were dead.”

Sharla turned away, unable to even conceive such a thought.

“Some of the people in Colony 9 got eaten…” Reyn commented.

Reyn looked between Sharla and Shulk and immediately felt guilty. “Sorry. Forget I said that.”

Otharon hadn’t taken his eyes off Sharla. “They don’t kill Homs right away. If that bronze-faced one took him, we still have some time left.”

“Are you sure?” Shulk asked.

Otharon turned to Shulk, looking at him properly for the first time. “Boy, that blade was once Dunban’s. I’m not sure why you have it, but we’re going to need its full power.”

“You can count on me,” Shulk replied.

Otharon nodded. “We’re heading for the Central Pit. It’s where they take all the Homs they kidnap. If Juju’s alive, that’s where he’ll be. Gather your things. We’re moving out.” 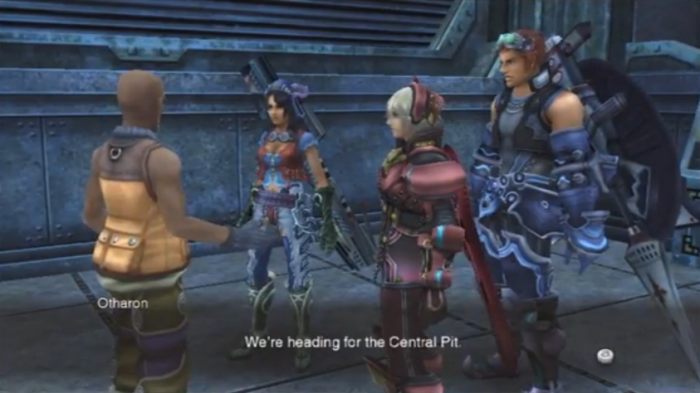 As Otharon moved away, Shulk experienced a vision.

Otharon was standing on what looked like a mobile artillery, his rifle pointing down into some kind of pit. He opened his mouth and began to yell.

“Juju! Gadolt!” Suddenly he was falling into the pit, at the bottom of which lay a river of ether. “This is for you!” “What?” Shulk fell back into reality with a shock. “What?”

Reyn glanced at Shulk, who had a troubled expression on his face. “You say something, Shulk?”

“N-No,” Shulk said quickly. “It’s nothing. Forget it.” He followed Otharon out of the mining base with Reyn and Sharla, trying to figure out what the vision meant—and what he could do to stop it.