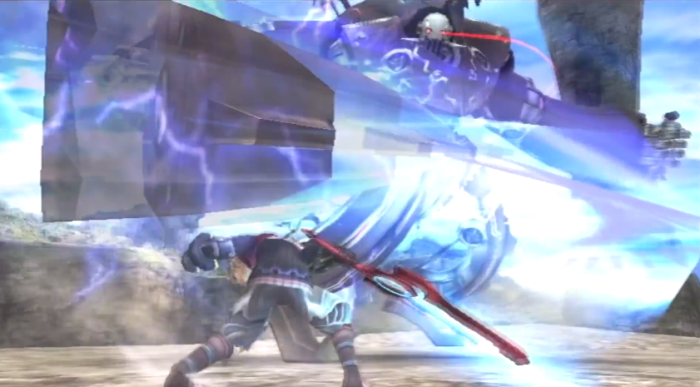 Chapter seventeen of my Xenoblade novelisation. We’ve tracked down Juju, and now we try to take him back!

Shulk, Reyn and Sharla tensed as they stood facing the tentacled Mechon. The rock they were standing on twisted around a central stony tower that was anchored in the earth far below them. This pattern was what gave the place its name: Spiral Valley.

We have to get at its main body. Shulk glanced at his foe’s appendages; long and thin, attached to a central commanding body. A tentacle flicked his way; he and his companions dodged it, and Reyn cut it through with his gunlance.

After a short battle in which the Mechon lost two more tentacles, the trio slowly backed away as it stopped moving. Its red eyes closed and the three legs it had been using to stand up were brought in, closer to its body. “Is it down?!” Reyn asked.

Even as he spoke, the Mechon once again sprung to life. It stuck its tentacles into the stone above it, and like some kind of insect, stalked on to the top of rocky formation and out of sight. 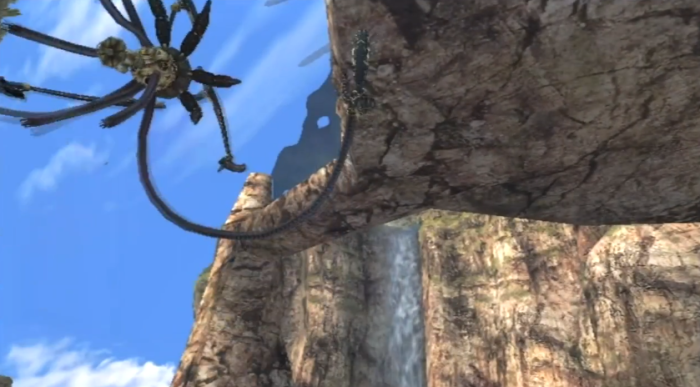 “Get back here!” shouted Reyn.

“Right!” Reyn led the way up a short ramp that spiralled around the central pillar. The Mechon sat in the centre of the stony platform and started to move as they approached. They spotted Juju caught in one of its claws.

Shulk counted four remaining tentacles sprouting from its body, with three more anchoring it to the ground. “Reyn! Sharla!” Shulk called. “If we can take out the parts holding it up, it won’t be able to move!”

“We need to get Juju out before then, or he might be crushed!” Sharla exclaimed.

The party closed in on the Mechon. A tentacle shot out at Reyn; he sidestepped it and sliced it through with his gunlance. Another went for Sharla; she dodged it and loosed some ether bullets from her rifle. Shulk dashed in and severed it, and it bounced across the platform and fell out of sight.

Shulk found himself starting to slow down. So it only lasts for a short amount of time. As Shulk prepared to use the Monado again, one of the remaining tentacles flicked towards Reyn and knocked him flying. “Reyn!!”

Reyn tumbled across the ground, eventually managing to stop himself. Damn… He glanced behind him and saw the edge of the platform not too far away.

Reyn grimaced at the sound of an explosion very close at hand, and felt energy flowing through his body at a rapid pace. He peeked over the top of his shield and saw Shulk and Sharla covered in a blue aura; looking down, he grinned as he saw it covering himself as well. He also noticed the head of one of the Mechon’s tentacles lying in front of him, riddled with dents. Must’ve been Sharla’s work.

Reyn dashed over to Shulk and Sharla. The only remaining tentacle was the one holding Juju. Fireballs were loosed at the trio, and they were forced to leap out of the way. Sharla fired at the Mechon with her rifle while Shulk and Reyn ran towards it. Shulk jumped into the air, bringing the Monado down on the final tentacle. As he did so, the propellor at its end opened. “Reyn!!” he shouted.

As if he had been reading his friend’s mind, Reyn leapt in front of the opening propellor and caught Juju. The two of them rolled across the ground as the Mechon exploded under Sharla’s ether bullets.

Sharla quickly put away her rifle and hurried towards Reyn and her brother. “Juju! Are you all right?!”

Juju slowly pulled away from Reyn to look up at his sister. “Sharla…” He turned away. “I’m sorry.” He stood as Sharla approached and didn’t complain when she slapped him.

Despite herself, Sharla couldn’t help but feel relieved to see Juju unharmed. She embraced him. “I’m so glad you’re OK.”

Reyn was still sitting on the ground, happy to see the family reunited. He looked back at Shulk. “Hey! Looks like we changed the future!” When Shulk didn’t respond, Reyn’s smile waned. “What’s up?”

“Well, it’s just that…” Shulk hated to be the one to point it out, “That can’t have been the Mechon from my vision.” He looked back at the remains of the Mechon on the ground.

Reyn stood and began to walk towards Shulk. “Yeah, weren’t it supposed to be that one with the face?” He grinned. “I guess we changed more than we expected!” His friend didn’t appear to agree. “Shulk?”

“No.” Shulk faced Reyn. “Something’s not right.” As he spoke, a large ether bullet exploded on the platform. A huge bronze-coloured Mechon that looked like some kind of ship hovered above them; it changed its shape to that of a humanoid before dropping into the middle of the platform. 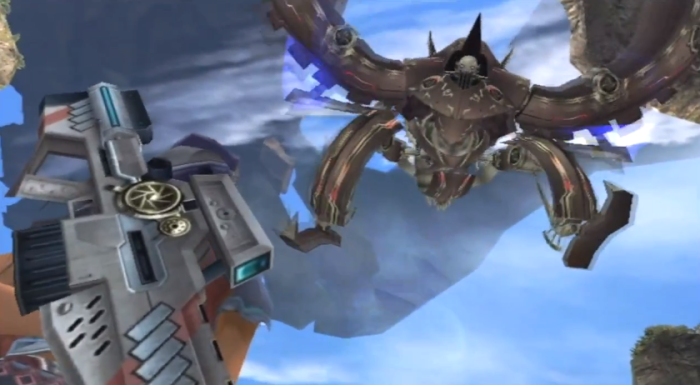 “No!” Shulk realised. “It’s not him at all!” Shulk thought this new Mechon looked rather like a beetle, with huge structures on its back that reminded him of a beetle’s hard wings. It had a stocky body shape; a short machine with thick arms and legs. Similar to the silver-faced Mechon, red lines ran along its entire body.

As it turned to face him and Reyn, his friend cried out, “But this one’s got a face ‘n’ all!”

The bottom half of the Mechon’s face moved in a way that resembled a jaw.

“I’ve been waiting for you! Monado boy.”

“What? It spoke!” Shulk was dumbfounded. He and Reyn were forced to jump backwards as it dropped its foot on them.

“The way Metal Face scarpered I thought you’d have to be this big scary monster. But look. You’re just some pathetic little kid!” The Mechon drew back its arm, showing off the huge hammer it used as a weapon. It then slammed it down on Shulk and Reyn, who jumped aside to avoid being crushed.

Shulk dashed in and hit it with the Monado, but just like with the other faced Mechon, the red sword simply bounced straight off its armour. He could hear Reyn yelling, and Sharla’s rifle as she fired at the machine. Shulk quickly ran back to the other two, shaking his head.

“No.” Shulk looked up at the faced Mechon as it turned away from him, Reyn and Sharla. To their horror, it picked up Juju. 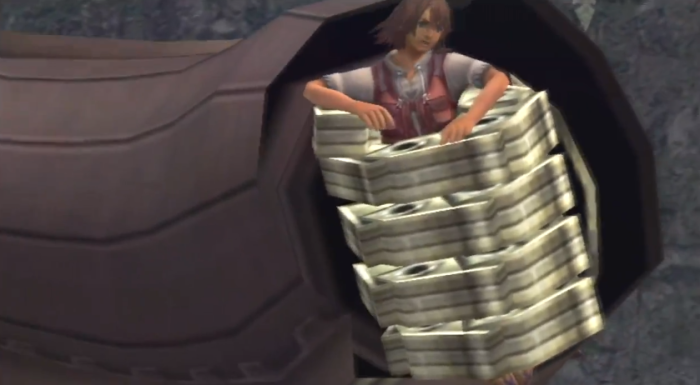 “You pile of junk!” shouted Reyn. He led the renewed charge against the Mechon. “Let him go!”

Its eyes, Shulk noticed, had started to flash red. “Reyn!” he called. “Better watch your back!”

“Got it!” Two Mechon M31 units fell from the sky, which Reyn immediately took care of. “Cheers Shulk!”

“You little!” The faced Mechon grunted as it swung its hammer. Shulk ducked, and then took a long step forward to avoid another attack. He swung his own weapon at the Mechon’s leg, but once again, the Monado had no effect. Shulk quickly stepped back as the Mechon raised its foot and brought it down on Shulk. He then rolled to avoid its hammer as it slammed into the ground where he had been standing a few seconds before.

Shulk ran around the outside of the platform, watching the faced Mechon carefully. “Why? Why can’t I use the Monado?!” He and the Mechon stared each other down. “It’s only the ones that have faces. But…” Shulk ducked and felt the wind from his opponent’s hammer as it whistled past his head, “I can still see what it’s going to do! Just like before!”

The Mechon’s hammer hit the ground behind Shulk as it spoke again. “Nice tricks you got there, pipsqueak!” It dragged its weapon across the ground behind Shulk, before it lifted it off the ground again. “Darting around the place! That the Monado’s power?” It took its time walking towards Shulk, seeming to savour the moment. “Won’t matter, you’re still flesh and blood, and I reckon you’re nearly done!”

An M31 unit appeared out of nowhere and tried to spear Shulk, but Reyn appeared just as inexplicably and knocked the thing out of the air with his shield.

“Behind you!” taunted the Mechon, as more M31 units dropped from the sky around the two friends.

“Shulk!” Reyn called. “Leave these to me! Go take him out!” He nodded to the faced Mechon.

“Got it!” Shulk left Reyn with the M31 and made his way towards his target. The Mechon lowered its fist to punch Shulk; he just managed to block the blow with the Monado, much to the amusement of his opponent.

Shulk felt as if he’d just bruised every part of his body. He crouched on the ground, unable to move, as the faced Mechon brought its hammer down on him.

Shulk heard the sound of a rifle and felt the Mechon’s hammer hit the ground next to him, landing less than a quarter of a metre from his leg. Both he and the Mechon looked to see Sharla, gun poised. “Now!” she shouted.

“Right!” Reyn dashed in to attack and was frustrated when he did no harm. “It’s just bouncing off ‘im!” 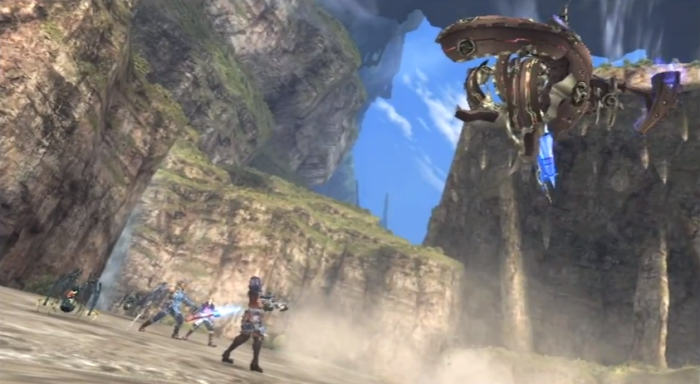 Suddenly, the faced Mechon leapt into the air, hammer raised above its head. “That was fun for a while.” It paused in the air for a moment. “But now I’m bored!” It crashed back on to the ground, slamming its hammer on to the platform. The air it whipped up was so strong the party found themselves pushed back to the edge of the platform.

“Sharla!” Juju screamed. His sister’s rifle lay on the ground; the woman herself was holding on to the edge of the platform with one hand, trying desperately not to lose her grip. The boys tried to go and help, but a large bronze leg blocked their way.

“Time to finish you off!” It raised its hammer high above its head.

Even as Reyn shouted, Shulk noticed a change in their foe. The red lines running through its body turned green, and then stopped. To everyone’s astonishment, it lowered its hammer and began to slowly back away. “Looks like my time here’s up. It’s your lucky day, little boy! But that luck won’t last forever.” With a laugh, it showed them Juju still squirming in its hand. “I’ll keep hold of this brat. If you want him back, you’d better come to Colony 6. But you’ll have to be quick. I’m feeling hungry!” 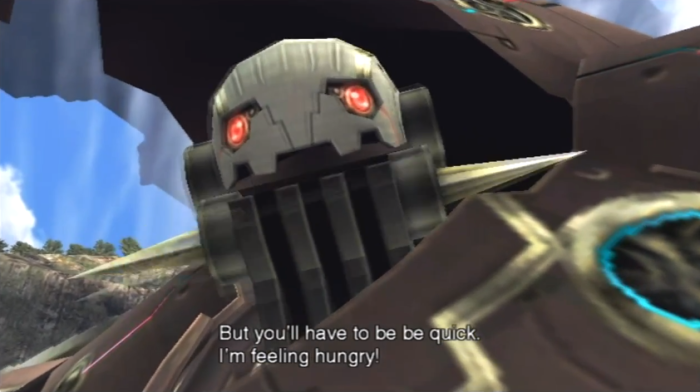 The faced Mechon laughed as it prepared to leave. “I can’t wait to grind you all into dust!” With that, it started to gain altitude.

Juju began to panic as the Mechon rose higher and higher. “Sharla! Sharla!” He watched as the stone platform grew smaller beneath him. “No!” The Mechon on the platform followed their leader as it transformed and sped off to the east, towards Colony 6. 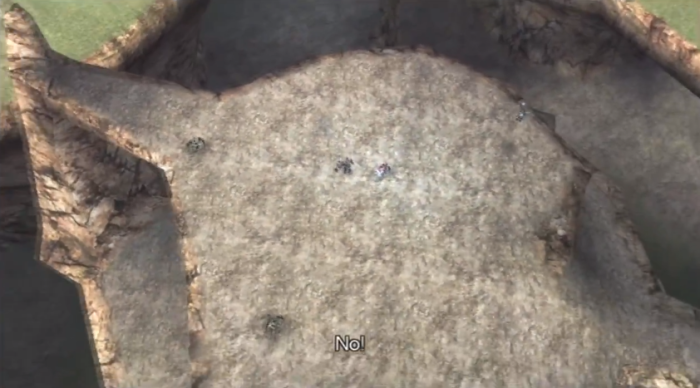 Sharla was finally able to haul herself back on to the platform of stone. She turned her eyes to the sky, where the Mechon had fled. “Juju…” Overcome by exhaustion, Sharla fell forward on to the rock and knew no more. 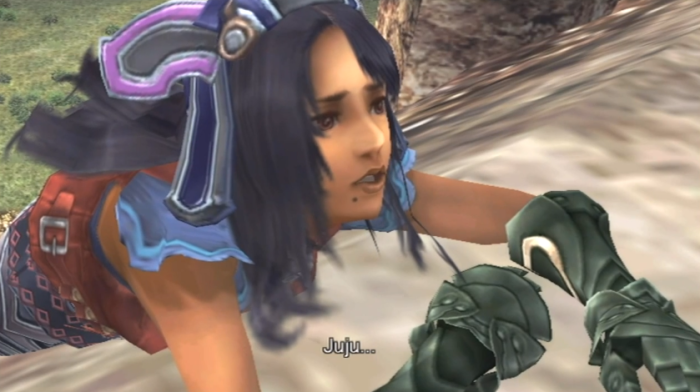