Juju runs off and Sharla joins the party in the fifteenth chapter of my Xenoblade novelisation!

Shulk and Reyn followed Sharla into a cave. Inside were a number of women, children and elderly people, belonging to both Homs and Nopon alike. The children stared as they walked through. The entire area was open; there was no privacy to be had here. The stone corridor was short, and looped back in on itself; there was barely enough room for the few dozen refugees currently calling it home.

Sharla led the boys to what was presumably hers and Juju’s area. A couple of mats lay on the ground for them to sleep on, and boxes full of supplies were stacked in a corner.

Sharla paused here. Where do I start… She turned to face the strangers from the Bionis’ foot. “We already fought off the Mechon a year ago,” she began, “at the Battle of Sword Valley. It left us with a false sense of security. The Colony 6 Defence Force didn’t even notice the approaching Mechon.” Her eyes darkened as she remembered. “By the time the air-raid siren had sounded, a swarm of Mechon had blackened the sky. They ate people and burned our buildings.” She repressed a shudder. “Me and Juju dedicated ourselves to evacuating the children and elderly.” Sharla shrugged. “I don’t know what happened next.” 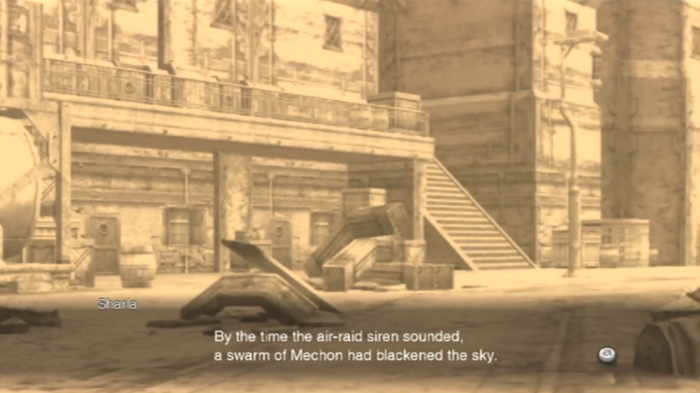 “It’s just like what happened to Colony 9,” Shulk muttered.

“They attacked your colony as well?!” Sharla was shocked.

Shulk nodded. “Yes. It’s good that you managed to evacuate so many.”

“We have Otharon… the Colonel… to thank for that,” Sharla replied. “Him and Gadolt.”

Sharla stared at the ground. “He would have been my husband by now if not for all this.” When she looked up again, she saw Reyn and Shulk shuffling their feet uncomfortably. She laughed. “Cheer up, you two!”

“We can’t lose hope just yet! I’m certain Gadolt and the other soldiers are alive. They’re still fighting.” Sharla sounded more determined. “I can feel it.”

Shulk turned to him. “Hmm?”

“You bet! We’re up for some revenge,” Reyn proclaimed “I bet we can even get your colony back.”

“There you go, showing off again…” Shulk sighed.

“If anyone can do it, it’s you two,” said Juju eagerly. “Could… um…” he steeled himself; just do it! “Could you take me with you to the colony?!”

“Juju!” said Sharla sharply. “The people here need us! How many times do I have to tell you?”

“But you heard!” Juju said angrily. “The Mechon attacked Colony 9! That means a load of them have left Colony 6 already! It has to!”

Sharla’s anger died; she hadn’t considered that. It doesn’t change much. “Even if that’s true… No, especially if that’s true! We cannot expose the camp to any more danger.”

“So…” Juju couldn’t believe what he was hearing from his sister, “you don’t care what happened to the people in the colony?!” He raised his voice. “How can you be so heartless? Are you that scared of the Mechon?!”

Suddenly Shulk felt the familiar pull on his mind, and found himself transported to another place.

What looked like mechanical stalks rose up from flames dancing across solid rock. The stalks ended in three-bladed propellers, and for a moment, Shulk saw one holding Juju; the vision changed, and he saw another holding Sharla.

Next he saw a hulking Mechon with a distinct face. Its shape looks too different from Metal Face’s…

Back in the present, Shulk heard Reyn speaking. “Oi kid!”

Reyn ignored him. “You oughta know how Sharla feels. Watch your mouth, and have some respect!”

Juju turned his gaze to the floor. He began to speak, but then stopped. I’ll show them. “I’ll go and make dinner.” His voice wavered as he spoke, and he left.

Reyn watched him go. “Maybe I was too hard on him.” He realised Shulk had been quiet for a while now. “Shulk?” Shulk, thinking of what he had just seen, didn’t reply.

“Reyn, you really remind me of Gadolt when you get angry.” For a moment, the gentlest of smiles could be seen on Sharla’s face.

“I… I do?” Reyn turned back to Sharla, unsure how to react.

“Gadolt’s taken care of us ever since we were young,” Sharla explained. “I always saw him as a big brother really, but he was more of a father to Juju… He’d call him ‘kid’ whenever he told him off, just like you did.”

“I don’t think I’m ready to be someone’s old man just yet…” said Reyn, feeling uncomfortable. He glanced back over to Shulk, who still hadn’t said a word. “Shulk? Did it happen again?”

“Yeah.” Shulk looked up at Reyn.

“You had another vision?” Reyn clarified.

The roar of a motor engine resounded through the cave before Shulk could respond. He felt his stomach drop. “Oh no!”

“No! Juju!” Sharla raced out of the cave with Shulk and Reyn in tow, and was horrified by what she saw. “The buggy’s gone!” she cried. “He’s going to Colony 6 on his own!” 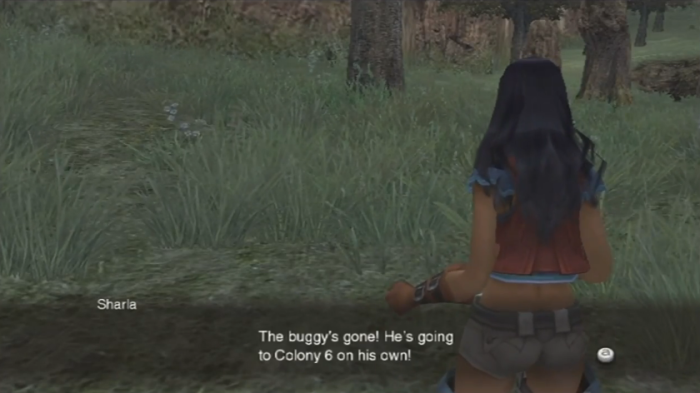 “We have to hurry,” Shulk advised. “Something bad’s going to happen.”

Reyn spun around. “What did you see?” he demanded.

“A deep valley… Everything’s engulfed in flames… There’s a black shadow…” Shulk paused, and then said, “It… kills Juju.” 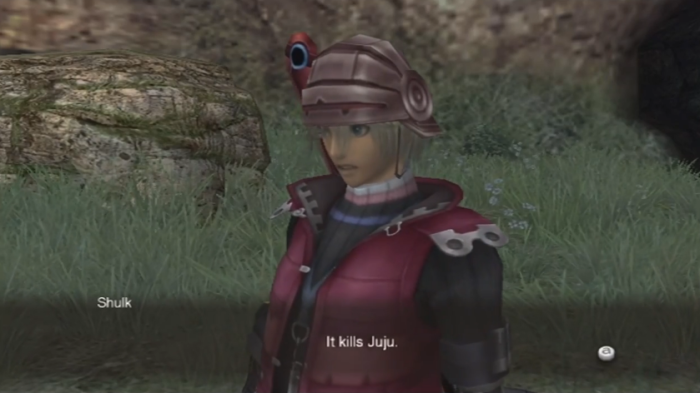 “Is it the Mechon with the metal face?” Reyn asked.

“Let’s get after him, Shulk!” Reyn turned to leave, and found himself facing a bewildered Sharla.

“Hold on a second! What was that all about?” Sharla’s mind was racing; vision? Juju… killed? A Mechon with a face…?

Reyn sighed. “I know you won’t believe this… but Shulk can see the future.”

“The future?” Sharla was skeptical. “That’s not possible.”

Shulk spoke up. “That’s what I thought too. I still can’t explain this. But that vision I had will come true unless we stop it.”

“So you’re telling me Juju’s in danger?” Sharla demanded.

“Believe it or don’t believe it, that’s your call. But I wouldn’t be standing here if it weren’t for Shulk’s visions.” With that said, Reyn began to walk towards the camp’s exit, on to the plains.

Sharla was wrapped in her own thoughts. “Juju…” She closed her eyes, weighing her options. With a sigh, she opened them again and faced Shulk. “OK. I can’t say I believe you. But what have I got to lose?”

Sharla glanced at him. “What?” she asked irritably.

“No, nothing.” Shulk shook his head.

Sharla was confused; What was he going to say…?

“What are you doing?” Reyn interrupted her thoughts. “Let’s go and find Juju!”

Sharla walked ahead of Reyn and stopped in front of him. “When you talk like that you sound just like Gadolt! That’s how I know it’s not worth arguing.”

“What am I, some kind of Gadolt substitute?”

Shulk watched the exchange from a distance; the vision ran through his head yet again. That thing kills Sharla too. I saw it in the vision. But I can’t stop her coming with us. I don’t know how I can protect her. Shulk shook his head to clear it. But I have to do it. I WILL change the future. 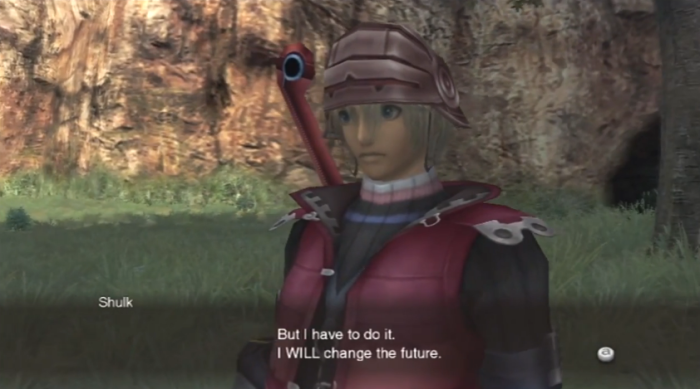 Shulk caught up to Sharla and Reyn. “Give me a second,” she was saying, “just let me grab my rifle.” She raced back into the refugee camp and returned a few minutes later with it slung over her shoulder. “Let’s get going, then.” Sharla led Shulk and Reyn north out of the refugee camp.

Reyn turned to Sharla. “Sharla, do you know which way Juju went?”

“There are quite a few ways to get there from here,” Sharla sighed, “but he’s in a buggy, so I think he’ll take Raguel Bridge.” 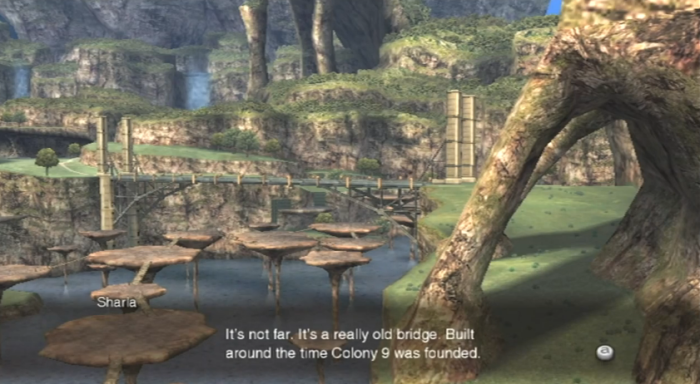 “Sounds like a plan!” Reyn turned to Sharla. “Sharla, you stay back. Leave any monsters up to me and Shulk.”

This served to irritate Sharla to no end. “What, you think I can’t pull my weight in battle?” She forced herself to calm down, though her tone still had a bite to it. “I’ve got field experience as a medic. If you get hurt, I can use ether to patch you up.”

“Nice! I’m always getting roughed up,” grinned Reyn. “You’ll be a big help!”

Meanwhile, at the Raguel Bridge, Juju was having mechanical problems.

“Come on! Who put this barrier in the way?” He stared at the buggy, which had crashed into the side of the bridge. “Ohh, now the front suspension’s all twisted up!” He looked to the other side of the bridge. “Looks like I’ll have to walk it.” His thoughts turned to the fight he and his sister had back at camp, and of the way Reyn had leapt to his sister’s defence. It made him furious. “They’re all cowards. I’ll show them all.” And with that, he began his long walk to Colony 6.