Chapter three of my Xenoblade novelisation. Dunban’s back!

Shulk followed Dickson out of the lab. They walked together to the Central Plaza, which had three bridges leading to each of the three districts.

Shulk felt a streak of pride. “Thanks, Dickson. Have you had a chance to catch up with Dunban yet?”

Dickson nodded. “He still insists on keeping that picture of us with Mumkhar, just before we took off to fight.” He snorted, and then sighed. “Too bad his arm isn’t getting any better. That damage looks permanent.”

This worried Shulk. “I hope not. I mean, Dunban’s the only one who can wield the Monado. If we ever get attacked by the Mechon again…”

Dickson glanced at him. Do you think so, Shulk? “Would you have him use that blasted sword again after what it’s done to him?”

They reached the Central Plaza. Dickson grunted. “I’ll be seeing you, Shulk. I’ve got an old friend to catch up with. He’s started up a stall in town. Just today, in fact.” He nodded and started heading down the western bridge leading to the Commercial District.

“Uh… See you, Dickson!” The older man raised an arm in acknowledgement, without stopping or turning around. Shulk continued on his way, south towards the Residential District.

He glanced over the side of the bridge that connected the Central Plaza to the Residential District. The Central Plaza and the three districts were all situated on flat beds of rock separated by water, over which was a bridge for each district. Shulk pulled out one of the gems given to him by the Gem Man and started toying with it in his hands as he walked.

At the entrance to the district he saw the mobile artillery that was causing so much headache for the Colonel. It was embedded in a building and smoking slightly. A couple of soldiers were making sure no one was going anywhere near the machine.

Shulk ambled through town, aiming for his favourite spot in the whole colony. He stared at the ground as he walked, deep in thought about the Monado.

There are eight different layers of glass, he thought. Does that mean the Monado has eight different abilities? Shulk thought this likely. Assuming, of course, that he was correct in thinking that each layer represented its own power.

From what Dunban and Dickson had told him, it seemed the Monado currently had two abilities. Buster was an extremely powerful attack which became even stronger when used against Mechon. The other, Enchant, allowed any weapon in the vicinity of the Monado to do damage to Mechon without the need to Topple it. For a short amount of time, at any rate.

Shulk decided that it was probably Enchant which was more useful. I wonder if all the Monado’s abilities are specific to Mechon? Shulk wasn’t sure, but he guessed so. The sword was, after all, famous for being able to defeat Mechon. And how would one go about activating the other six functions?

Shulk shook his head as he crossed the bridge taking him out of town. He smiled as he watched the Bunnits hopping around in the grass. Humming to himself, he turned left and leisurely made his way to Outlook Park.

At his home near the entrance to Colony 9, Dunban was sitting up in bed examining his damaged right arm.

“Dunban, are you awake yet?”

He let out an exaggerated sigh. “Is it time to eat already?” He watched his sister ascend the stairs. “You didn’t have to bring it yourself. You could have just called me.”

Fiora placed the tray of food on the small table beside him. “Don’t be silly!” She crouched down beside the bed. “Do you want me to feed you?”

Dunban laughed. “Don’t treat me like an invalid. I’m better than I was a year ago.”

“Much better,” Fiora agreed. She turned and leaned on the bed, her green eyes staring up at the ceiling. “I really thought I lost you back then…”

Fiora jumped off the floor as if it were burning her and spun to face her brother, her light blonde hair whipping about her face. “Dunban, don’t say that!” She exclaimed furiously. “The Mechon have gone now! Why would you say that?!”

Dunban eyed her warily. “I just mean I’m prepared.” He looked away. “Sorry.”

Fiora relented. “OK.” Sounding cheery again, she said, “More importantly, eat up before it gets cold. I made something really special today.”

Dunban was amused. “Don’t feel like you need to stay here then, Fiora.” He eased back into his pillows. “Go and make your next delivery.” Noticing his sister’s look of confusion, he continued, “Well, I’m sure you’d like Shulk to try some while it’s still hot?”

Fiora immediately lowered herself back to the ground. “That’s OK. Shulk has no sense of taste. He’ll say it’s delicious even if it’s stone cold.”

Dunban laughed. “In which case, today he would actually mean it.”

She thought about it for a moment before getting to her feet. “OK.” She turned to look at her brother. “Dunban… Thanks,” Fiora said gratefully. She left him and went downstairs.

When she was gone, Dunban pulled his crippled arm into his chest and crawled across the bed to his dinner, panting. Frowning with concentration, he picked up the spoon with his injured limb. He lost his grip and it clattered to the floor.

“I- I’m not finished yet.” He looked down at the picture of himself, Mumkhar and Dickson sitting on his dresser. “I have to be prepared to use the Monado again.”

Fiora had just stepped outside with Shulk’s food when Dickson saw her.

“Dickson!” She was glad to see him.

“Looks like you’re in a hurry,” he observed. “Where are you off to?”

“Shulk’s not there right now,” Dickson informed her.

“Really?” Fiora was surprised; when was Shulk not in the lab?

“I just sent him out to get some fresh air. You know where he’ll have gone.”

“Outlook Park!” Everyone knew that Shulk loved the place.

“That’s the one,” Dickson confirmed with a nod.

“OK.” She was glad he’d told her and saved her the extra trip. “Thanks, Dickson.” Dickson dipped his head and left, his braided hair bouncing slightly as he walked. 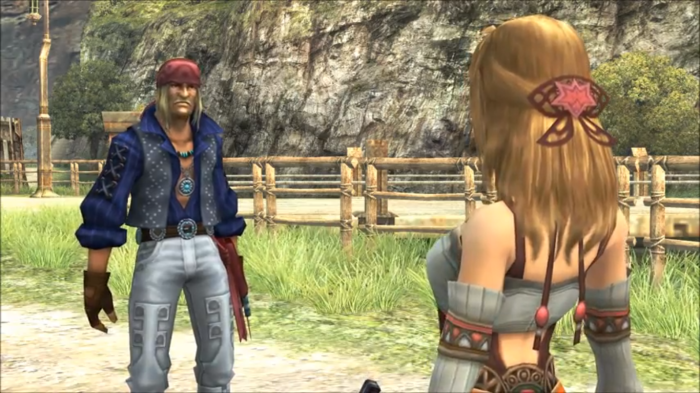 Fiora exited the colony and turned left, heading for Outlook Park. She dodged the bunnits that hopped towards her curiously, sniffing the air. When she arrived, she found him sitting on the bench facing the colony, staring at the ground.

Deep in thought, Shulk didn’t notice her approaching. “The Monado… It’s the only sword that’s effective against the Mechon armour.” He remembered the many tales he had heard about the blade. “They say that before time began, it was wielded by the Bionis.” He tried to wrap his head around the idea. “The same Bionis that we all live on.”

“It must have a secret,” he decided. “That’s how Dunban was able to destroy so many Mechon. And why he lost the use of his right arm.” He thought back to when Dunban had returned from that crusade. “If I can just unlock the secret of its power…”

He snapped back to the present and looked up. To his surprise, Fiora was standing in front of him, holding up a wooden lunch box. “Fiora!”

She sat down beside him and gave him the food. He immediately started to eat. “This is great!” He loved Fiora’s cooking. “It tastes so good.”

“Oh, Shulk,” Fiora sighed, leaning back on the bench, “you say that every day.”

Shulk paused. “Not quite.” He took another bite of his sandwich. “It’s always delicious. But today, it’s amazing.”

“Thank goodness!” Fiora’s fear concerning Shulk’s taste buds abated – for now. “I used some special herbs and spices today. So if you said it was just the same as usual, I’d know for sure you had no sense of taste!”

Fiora shook her head, looking out over the colony. “Oh, nothing.” Shulk went back to his food. Fiora looked around, taking in the sights. “The breeze feels so good,” she murmured, sedate.

Shulk looked up at the sky. “Yeah.” Smiling, he said, “I’d forgotten what it feels like. I never thought it could be so quiet here.”

“You’re spending too much time with Reyn,” she told him. “You’re getting used to all the noise he makes.”

Fiora giggled, and then looked back out across the colony. “It’s so peaceful. You know, Shulk,” she cocked her head to one side, “I hope every day can be like this, always.”

Shulk was still smiling softly, savouring the moment. They both started when a dull alarm sounded throughout the area. “The debris siren.”

“Strange,” Fiora commented. “There hasn’t been much falling lately.” They watched as the Anti-Air Batteries fired into the air, exploding on contact with their target in spectacular fashion.

Shulk pushed himself off the bench as Fiora packed up the leftover food. “There might be more on the way. The Anti-Air Batteries can’t protect us out here.” He stared up at the sky. “Let’s get back to the lab.”

“OK,” Fiora agreed, glancing out over the colony once more. Despite herself, she couldn’t help but pause by the railing. “Hey, Shulk…” He looked back at her, eager to return to safety. “You remember that time we watched the sun rise, right here?” Shulk frowned. “It was when we were quite young.”

“Yeah, I remember,” he answered slowly, walking back towards her. “We came because you and Dunban had a big falling out.”

“Yeah.” Fiora nodded. “It wasn’t pretty.” Cautious, she added, “Really it had nothing to do with you… But I still dragged you out and made you stay up all night.”

“I’m glad we did it, even though it was only that one time. We talked for hours and hours about all our hopes and dreams…” Shulk felt himself warming up inside as he recalled the details. “And then you fell asleep on my arm as we looked up at the stars.”

Shulk was startled. “What? What is it?”

Fiora looked down at the ground. Oh, Shulk! I have this terrible feeling I said something really embarrassing. She fought to keep herself from blushing. Like I wanted to get married?

She met his worried gaze. “Umm… Shulk?” she began timidly. “You don’t… remember what I said back then?”

“Kind of,” he replied thoughtfully, “I can’t quite put my finger on it. Hold on, I know I’ll get it.”

“Oh, er, don’t worry!” Fiora said hastily. “No need to remember. Forget I even brought it up. Anyway, that’s the end of that conversation! Let’s talk about something else.”

Shulk may have been confused, but he hid it well. “OK. Whatever you say, Fiora.”

Relief washed over Fiora. Yes! I think I pulled it off. He doesn’t suspect a thing. I hope he remembers one day… But for now… it’s just a bit too embarrassing!

Shulk waited but Fiora remained quiet. Gently, he said, “Fiora? Shall we go back to the lab?”

She jumped. “Oh, sure, Shulk, let’s go!” She walked with him back towards the colony.